Architect Frank Gehry has explained how his seminal 1978 home in Santa Monica caused a stir in an exclusive interview with PIN-UP magazine to mark the publication's 30th issue.

"The neighbors got really pissed off," Gehry said of the project that helped catapult him to fame.

"The neighbor two doors south of me was a lawyer. She complained to the city and filed a lawsuit."

Called the Frank and Berta Gehry Residence, the project involved extending a home built in the Dutch colonial style on a corner lot in a leafy suburb.

Gehry's pioneering use of cheap materials including chain-link fence, corrugated galvanised steel and plywood caused a sensation, helping catapult the architect to fame.

The choice of materials was partly an economic decision, the 92-year-old told PIN-UP interviewer Mimi Zeiger, saying he spent just $50,000 on the project.

"We had two little kids and not much money," Gehry explained. "We needed to do something quickly. My wife Berta found the house and, at my mother's urging, bought it."

However, the home was inadequate for the family's needs. "I had to fix it," he said. "It didn't have a large enough kitchen; it didn't have a bedroom for the second child. We spent $50,000, which is a very small sum with respect to the whole house."

Gehry used the project to try out unusual materials and deconstructed forms that would become his trademark.

"I was interested in simple materials — you didn't have to get fancy materials," Gehry explained.

"I worked with corrugated metal, which I liked galvanized. I didn't like the way it was typically used but I liked the aesthetic. And I loved wood, of course, from the Japanese-influenced stuff to wood framing."

Rather than alter the house itself, Gehry chose to extend it outwards, wrapping the extension around three sides of the building.

"We had a 12-foot side yard that we could build on,' he explained. "So, I said, 'Great. Why don't we just build a new addition on the side?' That became a foil against the old house — you kind of see the old house against the new construction."

"From the inside, I was interested in looking up and out rather than sideways, because the neighborhood wasn't thrilling in terms of architecture. But from the rooftop you could actually see the ocean, you could see the airport."

"I played with all of those things. That's why the windows were made the way they are. They take advantage of the large trees on the street and they play with the light."

"I was also working with the movement of the moon across the sky. You could see it from time to time at different points in the skylights. We would get a lot of reflections on the ceilings and skylights, light bouncing off cars in the street.

"There was a kind of kinetic light show going on, which you could look at or not — it wasn't an imposition as much as it was just there."

The project is considered a key milestone in the career of Gehry, who won the Pritzker Architecture Prize 11 years later but whose best-known buildings came later, including the 1997 Guggenheim Museum in Bilbao and the 2003 Walt Disney Concert Hall in Los Angeles.

Yet the modest Santa Monica project, which was a precursor to those flamboyant projects, was not immediately popular with the locals.

"The neighbors got really pissed off," Gehry recalled. "One neighbor from across the street came over and said, 'Why did you do this to our neighborhood?'"

Gehry asked the neighbour which house he lived in. When the neighbour pointed it out, Gehry replied: "Look, your backyard has a trailer. That trailer is made of metal and it's not very pretty. It's sitting there, we're looking at it. Your front lawn has some old car up on blocks. I think I'm just doing what you're doing."

Gehry's logic seemed to work. "Yeah, he had to think about it. He didn't quite get it, but he didn't make trouble." 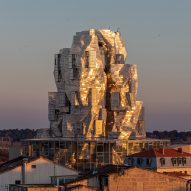 Another local resident kicked up more of a fuss. "The neighbor two doors south of me was a lawyer," Gehry remembered. "She complained to the city and filed a lawsuit and stuff, but she didn't get anywhere."

"Finally, she remodeled her house. And guess what she did? She built a new house around her old house. It doesn't look exactly the same, but she copied my idea."

Based in New York, PIN-UP was launched in 2006 by founder and editor Felix Burrichter. The interview with Gehry features in the 15th birthday "Legacy" issue of the biannual architecture magazine, which is on sale now.

The issue is available in a choice of two different covers, one featuring Gehry photographed by Buck Ellison days ahead of his 92nd birthday and another featuring a range of upcoming New York architects.