Frank Gehry has said he is as comfortable working on historically sensitive projects like his "nimble" Philadelphia Museum of Art renovation as he is creating blockbuster buildings.

But the Canadian-American architect told Dezeen that he could easily swap his signature style for designs more akin to 20th-century modernism in the future.

"I might become Mies van der Rohe or something – who knows where I'm going," Gehry said.

Speaking to journalists at the groundbreaking of his plans to overhaul the historic Philadelphia Museum of Art, he said that the project proves that he is just as capable of quieter, more contextually sensitive architecture if that's what a client requests.

"[Former museum director Annie d'Harnoncourt] wanted the so-called Bilbao effect, but all interior," he told journalists, shortly after the groundbreaking ceremony last week. "She said 'can you do it without being on the outside? We don't wanna see you on the outside'. And I loved that idea – it's a very perverse idea I thought."

"I think I try to be nimble enough," Gehry said, before suggesting that he isn't tied down to a single style. 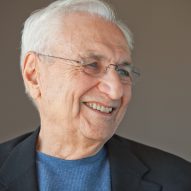 Along with the museum renovation, Gehry used the campus he designed for Facebook in northern California – modelled on his own offices – as an example of a different style of his work.

He also described the moment the tech company's founder Mark Zuckerberg approached him to work on the 40,000-square-metre office building, which has "the largest open floor plan in the world".

"He's not really an architecture buff so to speak," Gehry said. "But he came to my office and said, 'I like this'."

The architect was also defensive about his approach to sustainability, and said he is often frustrated by people who think he designs without considering energy efficiency.

"There is a presumption, I have found in the world, that when somebody does buildings like I do – that I'm not interested in that topic," he said. "And it's the furthest thing from the truth."

"From the day I became an architect, we were always talking about inefficiencies," Gehry added.

The 1989 Pritzker Prize winner spoke to Dezeen during a question-and-answer session with press in Philadelphia, which touched on a broad range of topics. Read the edited highlights below.

On his Philadelphia Museum of Art renovation

[Former museum director Annie d'Harnoncourt] wanted the so-called Bilbao effect, but all interior. She said "can you do it without being on the outside? We don't wanna see you on the outside".

And I loved that idea – it's a very perverse idea I thought. That's the kind of stuff I like – not knowing where we were going, not really understanding the building in detail. I mean I could see it, I knew it was a classical building, I knew about the Rocky steps and all that kind of stuff since I live in Santa Monica, which is close to Hollywood.

I think once we got into it we realised the classical form is simple: its got a z and y axis and over time that clarity has been obfuscated by interventions that weren't made in consideration of the DNA of the building, they were just opportunistic interventions probably.

It wasn't hard to explain, we all got it together. But how do you take an asset like an auditorium, which is expensive, tear it out, and what are you gonna do with that?

Oh god I hope it works. I hope we deliver what we said. I hope it's gonna make waves here that it's going to become one of the best museums in the whole country. Because it's taken the time to think it through, because it has the fortune to have well-thought-out bones done by [the museum's original architect] Mr Trumbauer.

There's a bunch of lucky stuff: the location of it in relation to the city; the importance of it because of the location. Forget Rocky – it's really important. It already does it. And when it gets the kind of art coming here, which supplements the great works you already have, it's gonna be a blockbuster. It's gonna make me happy, and I think I'm gonna feel like part of it and proud of it.

There is a presumption, I have found in the world, that when somebody does buildings like I do – that I'm not interested in that topic. And it's the furthest thing from the truth.

There's a whole part of my profession that's become fetishistic about it to the point that it supersedes the quality of life, the character, the feeling, the soul, the humanity of the building and that they're counter to each other, and that's not true.

I just built a house in LA, in which we were experimenting with geothermal wells and we put a whole pile of extra money into it just to complete this experiment. I'm in Santa Monica with this house and this German firm in Stuttgart is connected to the system and they're reading it daily while the house is being used.

From the day I became an architect, we were always talking about inefficiencies. The little house I built in 1978 in Santa Monica, I put a skylight at the very top that opens so that on a very hot day in LA, I come home, push a button, the skylight opens – 15 minutes the house is cool. I don't need to use air conditioning. I think that there's a sense of responsibility in the profession to deal with those issues.

On his approach to new business

When you have an architectural firm and a practice and you got a 100 or so people working for you – I don't market myself, or I don't have an agent or anything – I sit at the door and I wait for somebody to knock and say, "Hi Mr Gehry". That's the way it's been. It's opportunism in a way – I just wait for something to happen.

I do turn down things that I don't think are worth spending my life on and some of them would shock you how big and important they might be, but that I didn't feel comfortable with. But [the Philadelphia Museum of Art project] intrigued me because it came off of Bilbao.

To do something powerful without making a big architectural statement – I loved that idea, that challenge. I think I try to be nimble enough.

I might become Mies van der Rohe or something – who knows where I'm going.

On working with Mark Zuckerberg

He's not really an architecture buff so to speak. But he came to my office and said, "I like this". It's a warehouse with desks and a lot of models.

My office is almost an acre, and he said he wanted 10 times that – so 10 acres in one room. And so we proposed that, over parking, and then he wanted a garden on top, so we made a roof garden and that garden has now grown – it looks like a park, you don't see the building.

On his lack of residential projects

We don't do many houses, but every once in a while somebody comes in and wants to experiment. Doing a house gives you an opportunity experiment the language and do things that you can't do in a commercial or institutional project.

On his friendship with Robert Venturi

I gave a talk at MIT once, and we were in parallel and he gave a talk. While I was talking, he was writing very quickly on a yellow pad and then he got up and spoke and it was all against me. It was piece by piece just demolishing me.

And I looked at him and I said, "You're becoming an old fuddy duddy". Anyway, we have that kind of relationship. I know he's sick, I haven't seen him.

On his current projects

We're doing two, what you'd call developer projects with hotels, apartments, retail. One has been in the pipeline for quite a long time – it's across from the Walt Disney Concert Hall. And seems to be going ahead now, so it's a chance to take a cultural building that we've done that has its own persona and then connect it to a commercial project that has its own mandate, and have them talk to each other. That's exciting, because usually they don't. Usually the big, bad developer comes in and "kabunk" and there's no relationship.

And then we have another development project on Sunset Boulevard, across from the Chateau Marmont, so on the site of the old Garden of Allah, where F Scott Fitzgerald died. The Garden of Allah has been gone for a long time, but I was in LA when I saw it and so it's a historic site that's kind of important.

In the south of France, in an old Roman city that has two Roman amphitheatres, a client is building a foundation for arts and photography and so on. And it's kind of a special building, a special client. It's more sculptural so maybe you'd lump it with Bilbao – it's quite different form Bilbao. That's under construction. 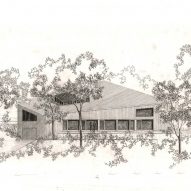