The radical idea would upend contemporary thinking, burying carbon-rich bioplastic waste rather than reusing it while putting to good use the vast amounts of waste generated by the fashion industry.

Burying bioplastic could be an "amazing thing"

"We look at our landfills and we cry about how immortal the stuff we put in them is," said the New York-based designer.

"But I think that landfills could pivot to being this amazing thing we did that saves us – or at least buys us some time – as we are barreling towards catastrophic climate change."

McCurdy describes herself as a designer and researcher who "focuses on making existential threats, such as climate change, more tractable through design". Her best-known work is a carbon-negative translucent raincoat made of algae-derived bioplastic.

She is exploring how plants and algae could be turned into carbon-rich bioplastics, alleviating the need for plastics made from fossil feedstocks and ending fashion's reliance on greenhouse-gas emitting materials.

Garments containing captured atmospheric carbon could be buried rather than composted or recycled after use, preventing the carbon from re-entering the atmosphere.

Landfills could be "consumer-driven carbon sinks"

The creation of artificial carbon sinks is considered a key tool in the fight against climate change, with companies such as Climeworks capturing carbon from the atmosphere and pumping it underground.

But McCurdy proposes creating carbon sinks from unwanted fashion products, putting the huge amount of waste the industry creates to good use.

"The best thing that could happen to the raincoat is that it goes into a modern landfill and the sequestered carbon stays solid for 100 million years," McCurdy said.

"If we changed our feedstocks, we would feel very differently about landfills as they would represent consumer-driven carbon sinks."

McCurdy developed her own bioplastic while a student at the Rhode Island School of Design.

Besides the raincoat, she has used it to form the translucent green sequins on a dress she created earlier this year in collaboration with luxury fashion house 3.1 Phillip Lim.

To create the material, McCurdy grows marine macro-algae, which uses energy from the sun to split atmospheric carbon dioxide into its constituent elements, keeping the carbon and releasing the oxygen.

"The carbon is [then] no longer a greenhouse gas," the designer explained. "It's now a sugar that the algae is using to build its body." 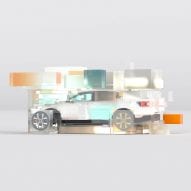 As part of its growth process, the algae builds long chains of carbon-based molecules, which McCurdy then extracts using heat and water.

After being cured and formed in a mould, the resulting bioplastic consists of around 46 per cent carbon by weight.

According to McCurdy, her raincoat captures carbon equivalent to burning a quarter of a litre of gasoline.

"Carbon is an amazing structural atom," she added. "It has all these different bonding powers."

"There's a reason life chose it as the backbone of its chemistry. All textiles are strings of carbon, whether they're synthetic or natural. A strand of cotton, if you zoom in, has carbon chains at its core."

To create her fossil-free garments, McCurdy has had to rethink all of the elements that make up a traditional item of clothing from the stitching to the fastenings.

For the raincoat, she used cellulose rayon derived from wood pulp instead of polyester. The hardware is brass instead of steel since steel emits CO2 into the atmosphere during its production.

To waterproof the coat, she developed her own plant-based wax instead of using beeswax or paraffin, which comes from fossil resources.

Meanwhile, the murky green colour of her bioplastic sequins was achieved through mineral, rather than synthetic, pigments.

Bucking the trend for biodegradability in sustainable fashion, McCurdy says she hopes her garments will stay intact for millions of years once discarded to prevent the captured carbon they contain from re-entering the atmosphere.