Five irregularly stacked boxes wrapped by red staircases will form the Harbour Experience Centre, which MVRDV has designed for the Port of Rotterdam in the Netherlands.

The Harbour Experience Centre will open in 2024 at the port's westernmost point for use as an exhibition space and visitor centre for the site.

Its twisted, stacked form has been designed by MVRDV to stand out from its low-lying surroundings while offering visitors panoramic views of the coast and port.

It also nods to the "dramatic presence" and industrial heritage of the Port of Rotterdam and will be crafted with pared-back, low-cost and recycled materials.

"We think of the Harbour Experience Centre as a machine to reveal the incredible world of the port", said MVRDV founding partner Winy Maas.

"It's low-cost, it's stripped back, you can see some of the building's structure when you're inside. But it, therefore, does its job almost ruthlessly – just like the machinery of the port itself."

"Every part of the design is geared towards engaging people and then educating them about their surroundings," Maas added.

"In that way, it not only teaches people about the Port of Rotterdam but envelops them in the spirit of the port itself."

Harbour Experience Centre has been designed by MVRDV as the successor to FutureLand – a temporary information centre dedicated to the port that opened in the port in 2009.

The success of the centre prompted calls for a larger permanent centre on a more prominent site within the port.

The twisted stacked form of the 3,500-square-metre building was informed by the activities that will take place both inside and out of the centre.

Each floor is square in plan and rotated to frame a specific view through a large window at one end. The cantilevered corners will be used as roof terraces.

All five floors will be connected by a large central atrium, which will double as a large exhibition space containing a suspended sculpture and model of the Port of Rotterdam.

This space will also become the entrance to the building, accessed through a rotating door that is designed to conceal the exhibits and scale of the atrium until entering.

A permanent exhibition for the centre is being created by Amsterdam design agency Kossmanndejong to occupy the three middle levels of the building.

Each level of the exhibition will explore a different theme and their large windows will each frame specific parts of the port that will "enhance the content". 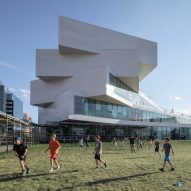 Glimpses inside the exhibition spaces will be provided externally from the staircases that wrap around the building.

These stairs, which provide a route up to the rooftop terraces, will be free for the public to access in an effort to encourage people to go inside.

The structure for Harbour Experience Centre will be made from steel recovered from demolished structures, while the facade will be partly composed of recycled materials. Internal acoustic ceilings will be crafted from recycled paper pulp.

According to MVRDV, the design will also be fully demountable at the end of its useful life so that all elements can easily be reused.

The Harbour Experience Center is planned to be carbon-neutral in operation through a combination of efficient insulation and renewable energy sources including 266 solar panels and a windmill.

MVRDV is an architecture studio founded in Rotterdam in 1991 by Maas with Jacob van Rijs and Nathalie de Vries. Other recent projects by the studio include the world's "first publicly accessible art depot" in Rotterdam and a proposal for an artificial hill alongside London's Marble Arch.

BIG also recently used a series of stacked boxes to create a white-brick and glass school in the USA, while OMA used three staggered triangular volumes to create RAI Hotel in Amsterdam.

The visuals are courtesy of MVRDV and Kossmanndejong.