Designer Jordan Ralph has created an off-grid artist's cabin called Studio Drop on an island off the west coast of Galway, Republic of Ireland.

Created as part of the coronavirus-extended programme for the Galway 2020 European Capital of Culture, the studio was built on Inis Oírr – one of the Aran Islands off the west coast of Ireland.

Ralph designed Studio Drop as a space for week-long artist residencies that looks both modern and familiar.

"The core concept for Studio Drop was to design and create a deployable piece of microarchitecture, that would land on Inis Oírr and serve as a space for artists to participate in residencies for a week or two in relative isolation," Ralph told Dezeen

"We wanted to design an original piece that felt both contemporary, and simultaneously indigenous to the land and people of Inis Oírr."

The simple structure has a circular form that tapers slightly and is informed by other structures built to withstand harsh conditions as well as local coastal buildings.

"Cylindrical forms are ideal for the gale force storms that frequent the Irish west coastline, and force the wind to break around them rather than push them over," said Ralph.

"We looked to deployable structures designed for extreme environments for inspiration; one design in particular that really inspired me early on was the South African Antarctic research base."

"Then we started looking closer to home, and honed in on the forms of native coastal structures like Martello towers, the beacons of West Cork, Clochán beehive huts and lighthouses," he continued.

"All these forms share a tapering cylindrical composition, small windows and a sturdy footprint."

The studio was built with a steel X-shaped skeleton onto which prefabricated timber elements were bolted.

The construction method was an evolution of techniques the team observed being used by local boat builders in Galway. 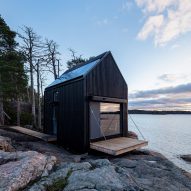 Majamaja is an off-grid seaside cabin near Helsinki

This structure was then clad in vertical larch planks that were stained a shade of green similar to carrageenan seaweed, which can be found on the island's coastline.

"The green finish strikes a balance allowing the form to stand out just enough while still blending in with the limestone landscape and dry stone walls on the island," explained Ralph.

Inside the hut, the timber and steel structure was left exposed with sheep's wool insulation held in place between the beams by a large trawler net that was salvaged by a local fisherman.

The trawler net was also used to create a hammock that can be raised to the ceiling.

A bench wraps around the entire studio, broken only by the door and window, which was placed at the same level as the seating so people can use the sill as an outdoor seat.

Ralph hopes that the studio, which opens on the summer solstice, will be a place of reflection for the artists that use it.

"I wanted it to be a space that felt safe and womb-like, and fostered a sense of inward reflection," he said.

"I wanted it to feel very grounding, and allow an artist to feel comfortable and excited to think and create," he continued.

"The window allows a gentle light into the space, which really gives the resident artist a sense of connection to the time of day and weather outside."

Other off-grid cabins on Dezeen include a seaside structure built near Helsinki as a holiday home and a zero-impact mountain hut in the Swiss Alps.

Photography is by Mark McGuinness.