Glass elevators and an observation deck are under construction at the top of Kohn Pedersen Fox's supertall skyscraper One Vanderbilt in New York.

Called Summit One Vanderbilt, the observatory and elevator ride is being built near the top of the 1,401-foot-tall (427 metres) building next to Grand Central Station in Midtown Manhattan.

Ascent is a glass elevator complete with a transparent floor that will take visitors up the outside of the supertall skyscraper to a height of 1,210 feet (369 metres).

Glass boxes that form part of an attraction called Levitation will protrude from the side of the building, allowing guests to look down over the city from 1,063 feet (324 metres).

The observation deck called Summit and will feature high glass perimeter walls and an open-air bar. 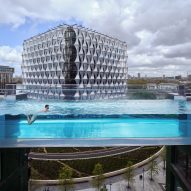 "We have created a destination that offers an interactive experience that will be remembered for a lifetime with the best, amplified views in all of New York City," said SL Green Realty CEO Marc Holliday.

Design studio Snøhetta is creating the interiors for the project, which will include a landscaped garden along with an "immersive art experience" made by creative studio Kenzo Digital.

Summit One Vanderbilt will open to the public on 21 October 2021.

One Vanderbilt, which opened in 2020, is the fourth-tallest tower in New York after One World Trade Center by Skidmore, Owings & Merrill, Central Park Tower by Adrian Smith + Gordon Gill and the 111 West 57th Street by SHoP. The latter two are still under construction.

Work on One Vanderbilt was delayed in 2015 when the owners of Grand Central Station filed a lawsuit over the air rights over the building.

Kohn Pedersen Fox, which was founded in 1976, recently unveiled designs for 343 Madison Avenue, a 1,050-foot-high (320 metres) supertall skyscraper that would be built nearby.

In London, another glass-bottomed attraction recently opened in the form of a transparent swimming pool suspended between two residential towers in Embassy Gardens.

The images and video are courtesy of Kohn Pedersen Fox.