Construction has begun on the One Vanderbilt tower in Midtown Manhattan, which will overtake 432 Park Avenue as the second-tallest structure in New York City.

The ground-breaking ceremony to mark the beginning of the tower's construction took place this morning at the site beside Grand Central Station.

An entire city block was demolished to make way for the glass-sheathed skyscraper, which was designed by international architecture firm Kohn Pedersen Fox (KPF).

The project is going ahead after legal proceedings filed in 2015 over air rights were abandoned in August 2016. 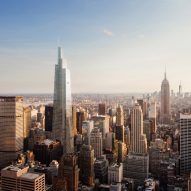 Shaped to reference New York's Art Deco towers, One Vanderbilt will feature angled sides that finish in steps towards its spire-topped pinnacle.

The building will connect to Grand Central's concourse via a giant staircase and a series of escalators at its base.

Retail spaces and a large atrium will also occupy the lower floors, while 1.6 million square feet (148,644 square metres) of office space will sit above.

KPF's other new skyscrapers in Manhattan include the recently completed 10 Hudson Yards, which welcomed its first tenants – fashion brand Coach – in June 2016.

The firm also designed the second tallest building in China and the tallest structure in South Korea.