Granite, oak and rattan are among the materials found in a California winery's hospitality building that has been refurbished by Danish designer David Thulstrup.

The Donum Home facility is part of the 200-acre (81-hectare) Donum Estate, which sits within the rolling hills of Sonoma County, just north of San Pablo Bay.

Founded in 2001, the winery is well known for its pinot noirs, along with the dozens of distinctive sculptures that dot its estate. The collection features work by famed artists such as Doug Aitken, Yayoi Kusama and Ai Weiwei.

Donum Home – which functions as a venue for tastings, dining and entertainment – opened in 2017 with a design by Matt Hollis of MH Architects in San Francisco. The modern-style building has a crisp profile and white cladding.

In advance of the winery's 20th anniversary this year, designer David Thulstrup – who leads an eponymous studio in Copenhagen – was brought in to freshen up the interior.

The project entailed adding new finishes and decor, along with reconfiguring the space to form three new tasting rooms. The aim was to create an environment that felt refined yet relaxed through a careful use of light and local materials. 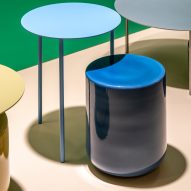 "The outcome is an honest, simple and not over-designed place that reflects its surroundings, while also paying an ode to my Scandinavian roots without any Nordic clichés," said Thulstrup.

Rooms feature neutral colours and earthy materials, such as oak-and-rattan screens designed by Thulstrup, and walls and floors covered in oak.

In one room, a rounded walnut dining table by e15 is surrounded by woven chairs by Thulstrup. An exuberant light fixture from Louis Poulsen hangs overhead.

In another room, a streamlined walnut table by Thulstrup is paired with a row of simple pendants designed by architect Peter Zumthor for Viabizzuno.

For the building's great room, where skylights usher in soft daylight, Thulstrup created a table made of California granite.

Floating near the ceiling are three mirrored-glass balloons that were created by Danish artist Jeppe Hein. The sculpture, called Three Colours for Donum, moves gently with the wind and refracts sunlight.

"Their mirrored surfaces reflect the surroundings and you at the same time, so you become a part of the artwork," said Hein.

The Donum Home also features a custom, hand-blown-glass vase by Danish artist Lene Bødker, and artwork by Chinese artists Yue Minjun and Liu Xiaodong. There also is a neon piece, titled Surrounded by You, created by UK artist Tracey Emin.

Studio David Thulstrup has designed a wide range of spaces and decor, including a photographer's studio inside a former factory building and the Michelin-star Noma restaurant in Copenhagen.

Last year, the studio teamed up with Danish furniture brand Møbel to create a pair of tables – one made entirely from ceramic and the other from powder-coated steel.

Photography is by Eric Petschek.