Pritzker Architecture Prize-winning architect Frank Gehry has revealed a tower for the Luma Arles arts centre in southern France ahead of its public opening tomorrow.

Named The Tower, the stainless steel-clad cultural building is the centrepiece of the Luma Arles arts campus in the town of Arles.

According to Gehry, the design references Arles' Roman architecture, nearby mountains and Vincent van Gogh's Starry Night painting, which was painted nearby.

The 56-metre-high arts tower contains the exhibition galleries, archives, a library, offices, seminar rooms and a cafe for Luma Arles.

Clad with 11,000 irregularly arranged stainless steel panels, the distinctive tower was designed to be a landmark structure for the arts centre, which was established in 2013 by Swiss collector Maja Hoffmann.

"The skyline of Arles is populated with towers built from the ancient times to the Middle Ages up to the present," said Gehry.

"The new building will help establish Luma Arles as a significant site among the other landmarks of the city."

The form of the building and the arrangement of the stainless steel cladding was informed by the nearby Les Alpilles mountain range northeast of Arles and how they were depicted by Dutch post-impressionist painter Van Gogh.

"The manner in which Van Gogh rendered Les Alpilles influenced the development of the exterior cladding of the building," said Gehry. 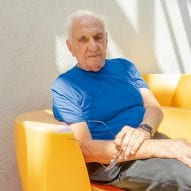 "The design of the tower seeks to capture the movement of discrete elements across a surface," he continued.

"This manner of breaking down the surface to visible modules became an important theme in the surface development of the building as it reinforced the idea of a 'painterly building'."

The arts tower rises from a cylindrical glass base that recalls Arles Amphitheatre, which was built in 90AD and still stands in the nearby town.

"Like the arena, the scale and clear geometry of the drum reflects the ancient Roman planning influences that set the foundation of Arles," said Gehry.

"The Romans used civic buildings to organise the densely situated buildings around it," he continued.

"The drum is both transparent and porous, with walls that open to the surrounding industrial buildings turning it into the central hub of the campus. The building grows out of the centre of the drum and is oriented towards the historic centre of Arles."

The Tower stands within the 27-acre former railyard that was left vacant in 1986, which has been turned into Luma Arles, funded by a €150 million donation from Hoffmann.

Along with the Gehry-designed centrepiece, a series of industrial buildings on the site have been renovated by New York-based Selldorf Architects.

These buildings, which once formed a railway manufacturing factory, have been converted into exhibition spaces, performing Arts residencies, a hotel and a restaurant.

"With every space in the complex we seek to create a balance allowing the 19th-century industrial vocabulary to coexist simply with contemporary purpose, all the while creating well-proportioned spaces with controllable natural light and clear circulation," said Annabelle Selldorf, principal of Selldorf Architects.

Canadian-American architect Gehry is one of the world's leading architects. The Walt Disney Concert Hall in Los Angeles and Guggenheim Museum in Bilbao are among his best-known buildings.

In a recent interview, he revealed that his "neighbors got really pissed off" by his seminal 1978 home when it was built in Santa Monica.

Photography is by Adrian Deweerdt unless otherwise stated.