A "curiosity molecule" named after American architect Buckminster Fuller is one of the weird and wonderful allotropes of carbon, explains nanomaterials professor Andrei Khlobystov.

Following an in-depth interview with Dezeen about the "unprecedented" properties of carbon conducted as part of our carbon revolution series, Khlobystov talked us through the various allotropes of the element.

"The existence of allotropes is just a manifestation of the very rich chemistry of carbon as an element," said Khlobystov, who heads the University of Nottingham's Nanocarbon group and Nanoscale and Microscale Research Centre.

Allotropes are different forms of the same chemical element. They have the same atoms but in different arrangements.

One of these is buckminsterfullerene, nano-scale spheres of atoms that resemble the geodesic domes popularised by the architect Richard Buckminster Fuller.

A geodesic dome, which Buckminster Fuller patented in 1954, is a lattice-shell structure based on a geodesic polyhedron, a three-dimensional shape made up of a series of triangles.

These triangular elements distribute stress throughout the structure, a phenomenon that Buckminster Fuller termed tensegrity, which makes the domes very strong for their size and weight.

The buckminsterfullerene molecule is not technically a geodesic polyhedron. Rather than triangles, the molecular structure is made up of a series of hexagons and pentagons, like a football.

But a photograph of a Buckminster Fuller dome reportedly inspired the scientists that discovered buckminsterfullerene in the 198os to first consider that the molecule could have a spherical structure.

"It's not super useful at the moment, it is still sort of like a curiosity molecule but I think it has [future] applications," said Khlobystov.

Carbon can form "very strong bonds" with other atoms

Carbon is not the only element that can form allotropes but it has the most due to the unique way its atoms are able to bond with each other in various different configurations.

"[It can] form very effective and very strong bonds with other carbon atoms and with other elements," Khlobystov said.

"This is actually quite unprecedented as far as the elements are concerned."

Khlobystov pointed out that carbon's ability to form multiple allotropes is just one of the characteristics that makes the element uniquely important.

"Carbon is very special," he said. "We are carbon-based life forms. All life on Earth is based on carbon. And this is not a coincidence."

Diamond and graphite are the two best-known allotropes of carbon but their radically different properties demonstrate how much of a difference the arrangement of atoms makes and how unusually versatile carbon is. 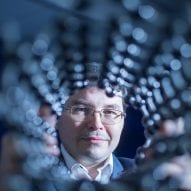 While graphite is soft, grey and electrically conductive, diamond is translucent, a poor conductor and the hardest substance on earth.

"They're almost complete opposites," Khlobystov told Dezeen. "It's the same element, but the way the atoms are knitted together is different and therefore the properties are very different."

Many carbon allotropes are made in labs

Carbon changes form under high temperature and high pressure such as the conditions that occurred in the early years of planet Earth. Nowadays, those conditions can be emulated in a lab, but some allotropes are harder to create than others.

While graphite and diamond occur relatively widely in nature, other allotropes are almost exclusively made in labs.

These include the much-talked-about "wonder material" graphene, carbon nanotubes and buckminsterfullerene, an allotrope named after the twentieth-century architect Buckminster Fuller.

Below, Khlobystov explains the key characteristics of the main carbon allotropes and what makes each of them exciting.

In graphite, each carbon atom has three neighbours, with two shorter bonds and one longer bond. This makes the structure look like sheets of hexagons, stacked into layers.

"Graphite is the most stable form of carbon," Khlobystov said.

"So we can take anything that contains carbon — for example, bits of wood or paper or anything organic — and then at very high temperature and pressure, it can turn to graphite."

Graphite is probably best known as the drawing material in pencils. A good conductor of heat and electricity, it is often used in electronics such as batteries and solar panels.

But the real interest in graphite at the moment is due to its close connection to two other allotropes, graphene and carbon nanotubes.

Graphene is a single-atom-thick layer of graphite. It is the top layer of graphite hexagons, shorn from their bonds to the next layer. This is possible because the longer bonds connecting the hexagons into layers are weaker and easily separated.

It is the "newest" allotrope because it was not successfully isolated and characterised in labs until 2004, albeit using a separation technique so simple it is known as the "Scotch tape method". This involves a piece of duct tape being used to peel a layer of graphene from a chunk of graphite.

In the years since, graphene has been labelled a "wonder material" due to the fact that it is a better conductor than copper and 200 times stronger than steel despite being six times lighter.

"Graphene is the most hotly discussed allotrope at the moment," said Khlobystov. "There's actually many conferences about graphene as a result of investment, because graphene is a good conductor of electricity, it's very thin, very light, very strong."

"There is a lot of interest in making touchscreen displays out of graphene because it's so electrically conducting and very transparent optically," said Khlobystov. "You can imagine using graphene instead of other expensive metal-containing materials in our mobile phones or anywhere we have a touchscreen."

Carbon nanotubes are similar to graphene. They are essentially a sheet of this single-atom-thick structure but wrapped into a tube. This nanotube is extra-strong while being around 80,000 times thinner than the diameter of human hair.

"It's quite difficult to deform a nanotube, so they're used to make reinforced materials such as polymers," said Khlobystov. "There are man-made fibres where polymer is blended with the nanotubes and extruded and spun into thread, and that can make really, really strong materials."

"It's also highly electrically conducting, so one can use nanotubes as part of electronic devices," he continued.

"Potentially, we can replace metal wires in our devices with carbon nanotubes. Because they're so small, we can make smaller and smaller devices and more powerful computers."

Carbon nanotubes also have many laboratory applications and have even been used as the world's smallest test tube. Another notable appearance is in "the world's blackest black", the light-sucking pigment Vantablack.

Nanotubes can be "grown" in the lab from any organic carbon source, such as graphite or methane gas. The application of a metal catalyst starts a reaction that makes the nanotube grow like hair grows from a follicle.

In diamonds, each carbon atom is connected to four neighbours, forming a repeating lattice structure. While some diamonds are classified as gemstone quality due to their clarity and colouring, their less photogenic counterparts are used in industrial applications for their hardness and thermal conductivity.

Currently, a lot of research is going into nanodiamonds – microscopic diamond particles with an average diameter of around four to five nanometres. In comparison, a human hair has a diameter of 120,000 nanometres.

"Nanodiamonds can be used for example as sensors, they can absorb light, they can mimic light and they can react to a magnetic field that is around them," he said.

"That makes them more useful than standard diamonds that we see in jewellery."

While most lab-grown diamonds are not gemstone quality, some are. In 2019 US company The Diamond Foundry used its technology to produce an all-diamond ring designed by Jony Ive and Marc Newson, which sold for US$256,250.

Unlike the other allotropes, which are potentially infinite lattices, buckminsterfullerene is a closed mesh of exactly 60 atoms.

The molecule was discovered in 1985 by a team of scientists, three of which – Harold Kroto, Robert Curl and Richard Smalley – would go on to win the Nobel Prize in Chemistry for the discovery.

Reportedly, it was seeing a photograph of one of Buckminster Fuller's geodesic domes that led Smalley to consider that the new molecule could have a spherical structure.

While the lattice-shell of a geodesic dome is constructed from triangular elements, buckminsterfullerene’s atoms are actually arranged in a pattern of hexagonal and pentagonal shapes that enable the mesh to curve around and close to form a ball. The story behind the discovery of the molecule and its resemblance to a football has led scientists to informally refer to it as "buckyball".

There are few known applications for the allotrope, although it is being used in solar cells and more experimentally in medicine and skincare, as it has the ability to trap free radicals and stop them from harming and ageing our skin.

"It's not super useful at the moment, it is still sort of like a curiosity molecule but I think it has applications," said Khlobystov.

There are also other kinds of fullerenes that have a similar closed or nearly closed structure, among them carbon nanotubes with their distinctive cylindrical shape.

Carbyne, or linear acetylenic carbon, is the latest carbon allotrope to be isolated — and simplest. It consists of a single chain of carbon atoms in a straight line. Unfortunately, this structure is also highly unstable.

"Diamond, graphite, graphene, they're really, really stable — it's one of the beauties of carbon actually," said Khlobystov. "But carbyne, particularly when it's very long, becomes tangled somehow and sort of reacts with itself.

"At the moment the best method to make it is inside carbon nanotubes," he continued. "So you use the nanotube as a little container to protect it from reacting with anything else."

While its instability is a problem and it has only been made in tiny quantities so far, the existence of carbyne shows where chemistry might take us next. Calculations show it to be the strongest material known per density — stronger than graphene, carbon nanotubes or diamond.

There could also be more carbon allotropes to come.

"I think there probably could be some more," said Khlobystov. "But I think these will probably be based on hybridisation or mixing and matching current allotropes. It's almost like a chimera-type thing, so you have elements of one allotrope combined with another one."

Carbon fibre is not technically an allotrope of carbon as it contains some other elements such as oxygen and nitrogen but those other elements occur in very small proportions.

Carbon fibre has a similar structure to graphite, with the same hexagonal pattern but a difference in how the layers interlock. Whereas in graphite the bonds are weak making it soft and brittle, in carbon fibre the sheets are crumpled or folded together, making them more interlocked and strong.

The first carbon fibres were made in the 19th century, with Thomas Edison baking cotton threads at high temperatures to carbonise them for use in light bulbs. Nowadays, the material is made to higher quality using the polymer polyacrylonitrile as the base.

Typically, carbon fibre is used as the reinforcement in composite materials, usually with resin surrounding it. This kind of carbon fibre commonly features in sports cars, such as Buggati's €11 million La Voiture Noire (above, as well as fighter jets, bikes, tennis racquets and even some furniture.

There's also an alternative process using filament winding, which has been said to produce a higher quality fibre and has been used to make structures such as the Elytra Filament Pavilion.

The carbon fibre composites could get even stronger in the future with the addition of carbon nanotubes, and greener by using plant-derived cellulose instead of petroleum-based polyacrylonitrile as a precursor.