Formerly called the Mid-Manhattan Library, the steel and granite library dates from 1914 and was built as a department store.

Its original structure has been retained and the renovation introduces a three-storey "vertical library", business and educational facilities and a publicly accessible rooftop garden and café.

The mechanical equipment of the Stavros Niarchos Foundation Library's (SNFL) is now concealed by a blue aluminium structure designed to echo the copper-clad mansard roofs of the neighbouring beaux-arts buildings.

"The SNFL is a powerhouse of wisdom," said Mecanoo partner Francis Houben.

"Its street presence brings drama and magic to Manhattan, visibly expressed with its wizard hat."

The SNFL is the first phase of the New York Public Library's Midtown Campus Renovation - for which Mecanoo and Beyer Blinder Belle were appointed in 2015.

The project will also see the two firms renovate the Stephen A. Schwarzman (SASB) building opposite.

At SNFL, Mecanoo led on design while Beyer Blinder Belle led on historic preservation as well as acting as the architect of record and designing the environmental graphics.

The approach aimed to improve the connection between the SNFL and SASB.

Upon entering from Fifth Avenue a canopy of wooden beams leads visitors in via an internal street towards the welcome area.

While the library's various facilities are primarily split across its eight floors, a series of gestures intend to open up and visually link different spaces and levels.

At ground floor level, a mezzanine balcony, lifts and stairs are located to the south of the plan, while to the north a cut-out in the floor gives views down to the Children's Library and Teen Centre. 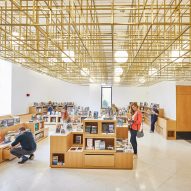 Accessed via a dedicated staircase, the media and study rooms in these areas have been decorated with murals by Brooklyn-based illustrator Melinda Beck.

An internal window gives views of the SNFL book-sorting machine.

At the eastern end of the building, the original steel frame has been cut to create the Long Room – a long, thin three-storey atrium providing reading areas on one side and book stacks on the other.

Views into these levels are framed by the windows for passers-by.

The reading areas are organised around bespoke desks and benches stretching up to 66 feet (20 metres) in length, supported by the original steel frame. The ceiling features abstract artwork by Hayal Pozanti.

On the fifth and sixth floors are the Business Centre and Pasculano Learning Centre.

A new seventh floor has been added at the level of the original building's roof. It houses a 268-seat conference centre with a pitched wood-slat ceiling.

Large windows look out onto a public, L-shaped roof terrace with an indoor café, providing dramatic views over Midtown.

Mecanoo recently completed both the Macau Central Library and the Tainan Public Library, both of which feature patterned facades that filter light into the interiors.

The photography is by John Bartelstone.