Portuguese architect Tiago Sousa has renovated the remains of a traditional house in the village of Romarigães by inserting a brick volume into an existing stone shell.

Called Box, the new two-bedroom house in Portugal does not extend beyond the footprint of the original building.

Instead, openings, terraces and balconies slot into the old stone walls.

"The existing volume has a singular configuration, rigid in shape and rudely built," explained Tiago Sousa.

A new red-brick volume slots into this contrasting stone envelope, with a new addition that peeks above the original roofline.

"The intention was to cause contradicting feelings to the observer," continued the architect. "It explores the balance and tension between the existing and the proposed form."

On the ground floor are the social spaces – a kitchen and dining space to the north and a living room to the south.

The living room opens out onto a raised patio via a set of sliding doors and is sheltered from the sun by a concrete canopy.

A spiral staircase in concrete and wood leads to the first floor, where two bedrooms sit on either side of a central bathroom. 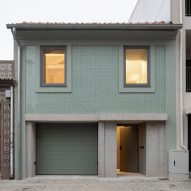 "These stairs present themselves as an ornamental element, with its fluid and curvilinear design," said the architect.

"It is a sculptural piece in concrete and wood that separates the dining from the living space."

In the bedrooms, the new insertion has been pulled back from the existing walls to create two small terraces with edges defined by the existing parapet that rises to form a gable on each side.

Openings in the new volume have been aligned with those in the old, maintaining their deep recesses and framing them with thin metal surrounds.

An original balcony, now inaccessible, has been retained on the western elevation.

The predominantly white interiors are contrasted by areas in the centre of the plan – a storage room on the ground floor and a bathroom above – lined with ribbed Sapele wood panels.

More Portuguese projects that combine old and new include an old community oven turned into a holiday home by HBG Architects and an abandoned 18th-century townhouse in Porto renovated by Fala Atelier.

The photography is by Ivo Tavares Studio.