168 Upper Street by London studio Groupwork was the focus of the final Dezeen x Knauf Architecture Project Talk, which you can re-watch by registering for the webinar.

Groupwork founder Amin Taha and project architect Jason Coe presented on the techniques they used to reinterpret a nineteenth-century building that was bombed in the second world war.

Located in the north London borough of Islington, 168 Upper Street is a terracotta-coloured concrete block that is designed to resemble a Victorian terrace with mismatched windows and openings.

The four-storey building houses three apartments and a showroom for Aria, the contemporary furniture and design company that commissioned the project.

Groupwork developed a virtual model of the lost building by studying photographs and carrying out a laser survey of a mirroring building at the other end of the parade.

The architecture studio intentionally avoided creating an identical copy of the original building, as a comment on the fallibility of human memory.

Instead, Groupwork distorted the virtual replica by adding deliberate and accidental alterations to the digital file, resulting in missing architectural details.

This digital model was then used to create an expanded-polystyrene cast, into which the coloured concrete was poured to form the building's load-bearing shell. 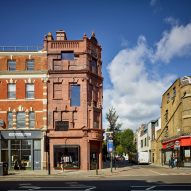 Inside, the exposed concrete walls feature wallpaper imprints, while the floors and internal partitions are made of cross-laminated timber.

Windows are determined by internal use and are punched through to the building's facade, resulting in mismatched openings that do not align with the details on the building's exterior.

Taha is the founder of Groupwork, an architecture studio formerly known as Amin Taha Architects, which he set up in 2003.

He also sits on the RIBA National and International Awards committee and advises pension funds on sustainable investment.

Coe joined Groupwork in 2010 and has been involved in a number of projects including the refurbishment of 115 Golden Lane, a mid-nineteenth century converted warehouse that won an RIBA National Award.

As project architect for 168 Upper Street, Coe was the driving force behind the project's exploration of innovative construction processes.

Dezeen x Knauf Architecture Project Talks was a series of live CPD webinars in which leading architects delivered an in-depth lecture about one of their key buildings.

Other talks in the series included lectures about Battersea Arts Centre by Haworth Tompkins and Cork House by CSK Architects and UCL.

The project was a partnership with Knauf, the world's largest manufacturer of gypsum-based construction materials.