The Cork House, designed by CSK Architects in collaboration with the Bartlett, was the subject of the second Dezeen x Knauf Architecture Project Talk. Register now to watch the recording.

Matthew Barnett Howland and Dido Milne from the Berkshire architecture studio presented their carbon-negative house, which was shortlisted for the Stirling Prize 2019, together with the Bartlett's Oliver Wilton.

Located on a small island in the River Thames, The Cork House is a single-storey dwelling comprising a row of five volumes with pyramid-like roofs and walls made from blocks of expanded cork.

The sustainable building was developed to address the architecture industry's contribution to biodiversity loss, carbon emissions and the depletion of planetary resources.

Expanded cork also reincorporates leftover product, as it is made from the waste that results when harvesting bark from cork trees.

Additionally, harvesting the bark does not fell trees, which allows landscapes populated by cork oak to retain their biodiversity, a term used to describe the number and variety of species in an ecosystem.

The resulting building is carbon-negative due to the structure's ability to absorb more carbon dioxide than was emitted during the entire construction process.

Conceived as a kit of parts for self-building, the components are prefabricated offsite and assembled on site like giant pieces of Lego.

The expanded cork blocks are designed to interlock, removing the need for glue and mortar.

The absence of binding agents enables the building to be dismantled into its constituent components at the end of its lifetime for reuse or recycling.

Inside, the cork is left exposed, while timber and copper are used for the remaining structural elements and details.

The Cork House is part of an ongoing research collaboration between Howland, the Bartlett School of Architecture, the University of Bath, Amorium UK and Ty-Mawr. 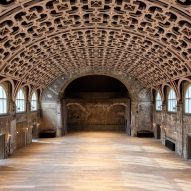 For the past seven years, the team has been developing sustainable cork-based construction systems.

In addition to its Stirling Prize nomination, The Cork House also won the Stephen Lawrence Prize 2019 and was longlisted for a Dezeen Award the same year.

Barnett Howland is the director of research and development at CSK Architects and led The Cork House project.

He also lectures at the Bartlett and has previously taught at the Architectural Association, University of Cambridge and London Metropolitan University, where he was awarded the RIBA Tutor Prize.

Milne is the director of CSK Architects. The Eton-based practice specialises in crafting bespoke buildings that are designed to be sensitive towards their predominantly historic locations.

In response to climate change, Milne's work focuses on innovative forms of conservation  – particularly the reuse and adaptation of existing buildings.

Wilton is director of technology and lecturer in Environmental Design at the Bartlett in London.

His research and teaching cover such fields of enquiry as inhabitation, material technology, environmental and energy performance, and developing new forms of construction.

Wilton is also a director of architecture practice WW Studio and has over 20 years of experience working as an architect and environmental design consultant.

Architecture Project Talk: Cork House took place at 1:00pm London time on Friday 11 June 2021. The talk has ended but you can register for free to watch the recording.

Dezeen x Knauf Architecture Project Talks is a series of live CPD webinars in which leading architects deliver an in-depth lecture about one of their key buildings.

Other talks in the series include lectures about Battersea Arts Centre by Haworth Tompkins and 168 Upper Street by Groupwork.

The project is a partnership with Knauf, the world's largest manufacturer of gypsum-based construction materials.