UK studio Citizens Design Bureau has renovated and extended a heritage-listed synagogue to create a museum that "tells the stories of Jewish Mancunians".

Set between a builder's merchant and a self-storage company in the Cheetham Hill area of Manchester, the studio aimed to create a building that would complement the industrial surroundings, but also be intriguing.

"We wanted the building to make people curious, to ask questions and most of all to make connections," said Citizens Design Bureau founder Katy Marks.

"It's essentially an industrial shed clad in corten steel, but delicately perforated so that it acts as an intriguing moment in a cluttered streetscape, sparking conversations in one of Manchester’s most culturally diverse communities," she told Dezeen.

Citizens Design Bureau renovated the synagogue, which was built in 1874 by Edward Solomons and is the oldest in the city, and added a weathering steel extension alongside it.

The colour of the Corten steel and a series of geometric perforations were designed to complement the synagogue and were directly informed by its Moorish architectural motifs.

"Our approach to the new building, therefore, takes a palette of rich, earthen colours and Moorish geometry in abstracted form," explained Marks.

"Rather than take one pattern and copy it across the facade, we wanted to express a process of enquiry, research and understanding, so the pattern is an exploration of eight-point geometry, with each node slightly different," she continued.

"We felt that now more than ever, we could express in architectural form the idea that 'we have more in common than that which divides us'."

Built around a skylight-lit atrium, the extension doubles the size of the museum and contains space for exhibiting and storing the museum's collection of 31,000 objects that tell the story of Jewish Manchester.

An archive is located on the ground floor, while a gallery space designed by London-based All Things Studio occupies the entire upper storey. 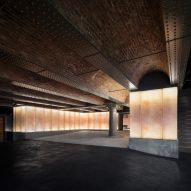 "Inside, the museum has a brilliant social history collection that was previously displayed within the synagogue itself," said Marks.

"We wanted to give the collection its own space to tell the stories of Jewish Mancunians and allow the synagogue to become a living artefact in its own right."

With the aim of attracting a wide range of visitors to the museum, the architecture studio created a large new entrance to the museum.

"We got a lot of feedback that many people found the appearance of the synagogue to be very explicitly religious, which gave the impression that the museum was specifically about the Jewish faith," said Marks.

"Creating a new and accessible entrance was key to making sure that everyone would feel genuinely welcome."

A cafe and shop were positioned alongside the entrance at the front of the extension to draw in visitors.

At the rear of the site, the museum is completed with a learning and community space that also contains a kitchen.

"As a small museum in an unusual out of town location, we were very aware that we would need to think holistically about this project and so the brief evolved to ensure that every single space became an integrated part of the museum experience," explained Marks.

"Through our test baking workshops, it became clear that not only is food a brilliant unifying force, it’s also a brilliant medium for storytelling," she continued.

"Visitors to the museum will be able to bake and eat together and learn about Jewish history through the medium of food."

Citizens Design Bureau is a London-based architecture studio that was established by Marks in 2013.

Photography is by Philip Vile, unless stated.