Álvaro Siza and Carlos Castanheira Architects have built a monolithic concrete art pavilion that will be used to display sculptures by Siza in an art park in South Korea.

The pavilion was informed by another Siza building, a gallery that was designed to display two Pablo Piccasso pieces, Guernica and Pregnant Woman, for the 1992 Madrid European Capital of Culture but was never built.

"This project started with a very uncommon demand from the client and the art director of the park at the time," studio founder Carlos Castanheira, who has long collaborated with Siza, told Dezeen. "They liked very much one project made for Madrid European Capital of Culture 1992 that wasn’t built."

"It isn’t usual for us to 'repeat' a project in other places because we believe that each building belongs to a certain place or site," he added.

"But I went to visit the site and met the client and liked both and so we accepted the challenge knowing that it wouldn’t be exactly the same project because the site was different and the program also."

The 1,370-square-metre Saya Park Art Pavilion is roughly four times smaller than the building it references. It is located in Changpyeong-Ri in the Gyeongsang Province of South Korea, atop one of the area's tallest hills.

The pavilion takes shape as a linear, forked structure that is part-built below ground and was constructed using rough board-formed concrete.

A sunken pathway runs down the hill to the entrance of the building. Concrete walls surround the pathway and act as retaining walls, holding back the earth.

"Regarding the volume, shape and other examples that the client already had built in the park we decided to make it in rough concrete," said Castanheira.

"We thought that is the best material for the shape, program and – more important – to the landscape because it will adapt its colour with the passing of time." 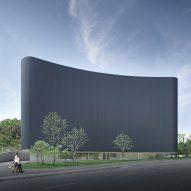 The two volumes are connected by a corridor that runs perpendicular to the building's forked volumes, enclosing a small courtyard.

Inside, the monolithic look is continued. Vast concrete corridors lead visitors around the building, with squared openings in the walls and ceilings providing glimpses of the sky.

"Another very important thing was the approach to the building and how to circulate inside, and how the light and shadow will change by walking along the different closed or open spaces," said Castanheira.

"The views to the outside are very much controlled and the visitor is only allowed to look outside when the architect allows it. Like with any good architecture it is a necessary movement to absorb space and time."

Like the unbuilt Picasso exhibition space it was based on, the building is used to display sculptures. These were designed by Siza and explore the theme of life and death.

The sculptures were placed within openings in the corridors beneath skylights that illuminate and spotlight the works over the duration of the day.

More recently, the architects used black corrugated metal across the exterior of the undulating, windowless walls of the Huamao Museum of Art and Education building in Ningbo, China.

Photography is by Fernando Guerra unless otherwise stated.