The project is located in Granadero Baigorria, a town in the Argentine province of Santa Fe.

It is part of a programme in which government-subsidised lines of credit are offered to residents to enable them to own their own homes.

The low-cost development was built on state-owned land that formerly belonged to the National Railway System.

The long, linear property is bordered on one side by railroad tracks. The other sides are surrounded by trees and urban development.

The project was designed by BBOA, or Balparda Brunel Oficina de Arquitectura, which is based in the city of Rosario.

The architects' overall goal was to create a unique design that departed from the norm for multifamily housing developments in the country, which tend to be homogeneous.

"The project acknowledges the issue of the impersonal style in housing complexes and the infinite repetition of dwellings of identical characteristics, as opposed to the need of identity and acknowledgement of individuality," the team said.

For the flat site, the firm conceived a mix of buildings that vary between three, four and eight levels. Totalling 12,700 square metres, the development encompasses 105 residences and eight spaces for businesses. 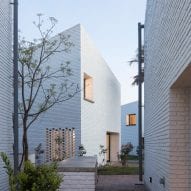 The buildings are made of reinforced concrete and are faced with pink-hued brick.

"That is not only the most traditional and common method used in the region, but it also identifies itself with the old railway stations, where the predominance of stonework is a common feature," the architect said.

In the three-level and four-level buildings, stairs are located within open volumes.

At the ground level, the openings enable a connection to the urban landscape along with the site's interior courtyards.

To accentuate the voids, the team used white paint, which contrasts with the brick cladding on the facades. Upper portions of the stairwells are surrounded by metal wire.

The taller buildings – three in total – are found at the centre and the ends of the complex.

Rather than each being a single chunky mass, the towers are composed of two conjoined blocks that are slightly offset.

This massing strategy strengthens the relationship between the buildings and the street, while also providing better views for tenants.

For all of the buildings, the team sought to minimise waste and to make use of local technologies. The structural system follows a regular grid that results in efficient layouts.

"The intention is to express an architecture that not only favours inhabitants but also the citizen," the team said.

Other housing projects in Argentina include a low-cost apartment complex for school teachers by Nomada and Eypaa and a residential building by Primer Piso Arquitectos that has rounded walls, courtyards and portholes.

The photography is by Javier Agustin Rojas.