White brick walls and angled roofs feature in a housing project in Rosario that was designed by Argentine firm BBOA to create a collection of similar homes but avoid monotony.

The Morrison development is located in a suburb of Rosario, the largest city in Argentina's Santa Fe province.

Local firm BBOA – or Balparda Brunel Oficina de Arquitectura – was charged with designing a residential complex for the upscale neighbourhood of Fisherton. The brief required that each dwelling was the same size and contained the same number of rooms.

For a 1,500-square-metre parcel, the architects created an ensemble of seven free-standing houses that are placed at different angles on the rectangular site. Each 100-square-metre, two-storey building has white brick walls and an angled roof.

Inside, the homes have identical floor plans, with public spaces located on the ground level and sleeping areas situated above.

At the heart of the ground floor is a unit made of guatambú plywood where all service functions are gathered. The unit also helps articulate the function of each space on the main level – the entrance, stairs, kitchen and common area.

On the upper level, an angled ceiling adds visual interest and a sense of expansion. Simple finishes are found throughout the home, including white walls and concrete ceilings and floors.

While designing the project, BBOA sought "to avoid the infinite perception of a monotonous scenery". To create variation in the development, the team looked to the surrounding context and the neighbourhood's history.

"This project aims to uphold and reaffirm the values that we consider distinctive and inseparable from the surroundings, and translate them into a new, up-to-date architecture programme for the area," the architects said.

According to the firm, Fisherton emerged in the late 19th century to house employees of British companies helping to develop the Argentine railway infrastructure.

The English presence influenced the types of architecture that appeared, such as brick buildings with gabled roofs, surrounded by prominent gardens and tree groves. 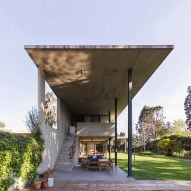 The neighbourhood has undergone various transformations over the decades.

To ensure its design was distinctive while also being contextual, BBOA carefully studied the area and found inspiration in the interstitial spaces that have historically existed between houses, and between each house and its own boundaries.

Using this as the basis for their design, the team focused on creating intermediate areas with different uses and proportions.

The non-linear layout of the houses helped allow for lawns and patios of various sizes and dimensions. A paved driveway winds through the site – wide in some areas and narrower in others.

"It would be each house's expansion area that brought that expected uniqueness, on account of proportion, lighting and its relation to the adjoining houses," the studio said.

"This Collective Housing Project was conceived with a respectful attitude, toward both the location and the requirements, along with a way of thinking and doing architecture that represents us and our architectural work."

Other projects in Rosario include a concrete residence that is also located in Fisherton and a courtyard house with a T-shaped facade.