Designer Christopher Al-Jumah has created Daughter, a community-oriented cafe in Brooklyn's Crown Heights with interiors informed by the staircases of local brownstone buildings.

Daughter is a long and narrow space defined by an L-shaped block of brown seating that can be seen from the street through the cafe's large windows.

Interior designer Christopher Al-Jumah said that the seating, which was informed by the stoops – small staircases – of local brownstone buildings, is Daughter's standout design feature.

The indoor stoops are made from a plywood base that was given a coating of concrete and sand with a top resin coat for durability.

"We spent months researching and testing different combinations of concrete, sand, plaster and resin to get the right look, feel and durability," Al-Jumah told Dezeen.

Interspersed with planters, the casual seating aims to invite people into the cafe and also influenced the rest of the project's design decisions.

"Everything started from the brownstone stoop. Once a representative brownstone colour was selected, everything else in the space was designed around it to complement," explained Al-Jumah.

Chairs by Danish brand Menu and an additional set of custom-made tables are placed opposite the stoops, next to the cafe's large windows that feature playful illustrations.

A curved bar designed in the same brown material as the stoops is tucked into a corner, while orb-like lights, also from Menu, glow above the stepped seating. 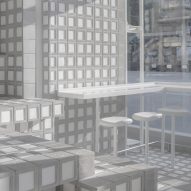 The furniture is positioned against exposed brick walls that are painted white in contrast to the cafe's bright yellow ceiling.

With their rough texture and appearance, the stoops are juxtaposed against smoother elements throughout the space.

"The walls have a soft white, tan colour to soften the space. Natural wood furniture and plants work as an organic complement to the stoop," said Al-Jumah.

The designer explained how the vernacular architecture of the Crown Heights area informed Daughter's interior, which was designed to create an inviting community atmosphere.

"Daughter is partly Black-owned and is situated in a historically Black neighbourhood, so it was important to capture the local culture and ethos and implement it into the cafe," explained Al-Jumah.

"Stooping, or sitting on the large steps in front of the local brownstone buildings, is a staple outdoor activity for the local community," he added.

"With 'community' and 'gathering' being central to the ethos of Daughter, we decided to bring the idea of stooped seating into the cafe itself."

In line with its aim to include the local community in its culture, Daughter plans to donate 10 per cent of its quarterly profits to various organisations including Ancient Song Doula, a group that seeks to eliminate infant mortality rates in the Black community.

Other cafe designs include a doughnut-themed cafe in Russia with walls that look almost edible and a cafe in Tokyo with brick-like tiles made from volcanic ash by design duo Formafantasma.