3XN and SLA have completed a climate centre in Lemvig, Denmark, featuring a wavy wooden facade influenced by the port town's boat-building history.

The Klimatorium is Denmark's international climate centre and is situated on the harbour front of the town on Denmark's west coast.

Architecture firm 3XN designed the building to express its function as a hub for climate, storm surge and water research, as well as to evoke the port's heritage of boat fabrication.

Landscape architect SLA oversaw the project's landscaping and nature design, which includes flood defences that are built into the urban environment.

The architectural concept for the Klimatorium focuses on simplicity and uses a reduced material palette of wood, concrete and steel to achieve an aesthetic that is rustic yet contemporary.

Its main symbolic gesture is the wave-like form carved into the facade. This feature was informed by Lemvig's traditional fishing boats and rises above the main entrance to form a distinctive landmark in the harbour area.

"Both inside and out, it becomes a gathering point and social meeting place for Klimatorium employees and guests as well as the people of Lemvig."

The curving, concave shape incorporates a set of wooden steps that can be used as benches. These have a natural wooden finish that contrasts against black-stained timber slats that shield the building's upper storey from direct sunlight.

At ground-floor level, the facades also incorporate glass that allows views out across the harbour. Doors set into the glazed section help to create a transparent and welcoming feel at the entrance.

The two-storey structure responds to the scale of existing buildings in the port area and accommodates offices, meeting rooms, common areas and a publicly accessible cafe and exhibition space.

Lemvig's port is currently being upgraded to protect it from future flooding and SLA designed the area surrounding the Klimatorium to fully integrate new flood defences. 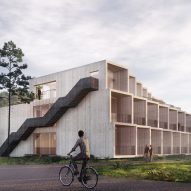 Rather than forming a barrier preventing access to the sea, the landscaping incorporates a wooden jetty that can be used for leisure or for hosting events on the water's edge.

The landscape design also includes an area called the Climate Corridor, which offers green urban space with a pleasant microclimate to visitors and the public, and demonstrates several of the concepts promoted by the Klimatorium.

"We use the Climate Corridor to showcase the ways in which we can use nature-based design to climate-proof our cities, while adding a whole new layer of nature experiences and activities," explained Karsten Thorlund, head of SLA Aarhus and project manager.

Greenery used across the site consists of native species that thrive in coastal environments. Trees are also used to partially shelter the water playground, parkour area and a multi-purpose sports court, as well as a skatepark created by Copenhagen design studio EFFEKT in 2013.

3XN was established in Aarhus, Denmark in 1986 and is now headed by four senior partners including original founder, Kim Herforth Nielsen. The firm works globally on projects including an office building in Stockholm with a twisting, brick-clad facade and a headquarters for the Olympics on the shore of Lake Geneva.

SLA was founded in 1994 as Stig L Andersson Landscape Architects and now has offices in Copenhagen, Aarhus and Oslo. The studio has worked on projects including the year-round ski slope on the roof of BIG's waste-to-energy power plant and a network of pools for mitigating flooding in Copenhagen.

Photography is by Adam Mork.