The mixed-use high-rise, which is at the centre of the image to the left of the other towers, would be 1,100 feet high (335 metres) and overlook Central Park in Midtown Manhattan, local pro-development publication YIMBY reported.

Developer Sedesco is also reportedly seeking a zoning authorisation for more floor space than what has currently permitted for the site.

This is part of New York's Zoning for Accessibility program, a new scheme announced in April 2021 where the Metropolitan Transportation Authority (MTA) can offer incentives to private developers looking to build near stations in return for improvements made during construction.

OMA hasn't released any information about the tower. If built, the high rise would join several other supertalls – a building over 300 metres – on Billionaire's Row, a cluster of residential skyscrapers cropping up at the southern end of Central Park on or near 57th Street.

Several of these towers are included in the OMA image, including 111 West 57th Street, a 1,421 feet (433 metres) super-skinny supertall by SHoP Architects. Due to complete later this year, this is the tapering, chisel-tipped tower to the right of the OMA proposal.

To the right of that is Central Park Tower, a 1,550-foot (472-metre) supertall by Adrian Smith + Gordon Gill, which is also nearing is set to become the tallest residential building in the world.

On the far right of this image is the already completed 953-feet-high (290 metres) 220 Central Park South by Robert AM Stern. 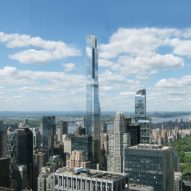 The Rafael Viñoly-designed supertall skyscraper 432 Park Avenue, which made headlines earlier this year after residents complained of floods and elevator problems, is also on Billionaire's Row but not visible in the image.

Recent projects in and around New York by OMA include a pair of residential towers on the waterfront in Brooklyn and plans for the first US outpost of The Centre Pompidou in Jersey City.

The main image is by OMA.