The white T-shirts and trousers worn by torchbearers carrying the Olympic flame at the Tokyo 2020 Olympic torch relay have been made from recycled plastic bottles collected by Coca-Cola.

"Based on the Tokyo 2020 Olympic Torch Relay concept ‘Hope Lights Our Way’, great importance is being placed on delivering an outstanding Japanese-style Torch Relay with a seamless continuity to the Tokyo 2020 Games," said the association.

The association's design team – which is headed by Olympic design director Daisuke Obana – collaborated with Coca-Cola to create the uniforms for the relay, which is currently underway in Japan.

Plastic bottles collected by the soft-drink brand have been recycled and used to form part of the uniform.

The material choice aligns with the Games' sustainability goals, which aim to "deliver a sustainable Games."

The loose-fitting T-shirt, shorts and trousers all have a red diagonal sash that runs from front to back. Such a sash is routinely worn in Japanese sporting relays.

"The design incorporates a diagonally-draped sash of the type used in place of batons in Ekiden, Japan’s famous long-distance relays," said Obana.

"As well as introducing an element of Japanese tradition, the design embodies respect for the Olympic Torch Relay and aspirations for the success of the Games." 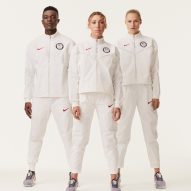 The sash also features a chequered pattern that is known in Japan as ichimatsu moyo. The same pattern can be found in the Tokyo 2020 logos.

"The path of hope weaved by each torchbearer is lit up by the Olympic flame and marks the way to the upcoming Games," said the association.

"This is expressed in the design, which originates in the Tokyo 2020 Olympic Torch Relay symbol positioned in the centre of the chest and connects to the 'look of the Games' ichimatsu moyo chequered pattern featured prominently on the back."

The white uniform is otherwise very simple in design. Its v-neck T-shirt features the Tokyo 2020 Olympic Torch Relay emblem on the front and the Olympic symbol on the back, while trousers and shorts have a red diagonal stripe.

The design team said it hopes the uniform "incorporates respect for the Torch Relay and hopes for the success of the Games".

“I have interpreted the Olympic Torch Relay as being something that connects torchbearers and their thoughts; in other words everyone who will participate in the Torch Relay having various thoughts – including about the Games – and the Flame connecting those thoughts," Obana commented.

Much like the Tokyo 2020 Olympic torch, which was made from construction waste from the Great East Japan earthquake and 2011 tsunami, the torch relay is meant to help victims heal and to celebrate the progress that has since been made.

"In Japan, these Games are being referred to as ‘the Recovery Games’ and so the Olympic flame will start its journey from an area affected by recent natural disasters," Obana said. "I hope that the Olympic flame that is transported to Japan will bring with it the encouragement and thoughts of people from all over the world."

The torch relay began in March 2021 in Fukushima to honour the lives lost in the earthquake, tsunami and nuclear disaster.