Japanese design studio Nendo's spherical cauldron, which opened to hold the Olympic flame, was the centrepiece of the Tokyo 2020 Olympics opening ceremony.

The dynamic, white structure was designed by Nendo founder Oki Sato to align with the opening ceremony's concept of "All gather under the sun, all are equal, and all receive energy".

Informed by the shape of the sun, the spherical form was made from ten aluminium panels with reflective interiors.

At the finale of the opening ceremony within the Kengo Kuma-designed Tokyo National Stadium these panels opened to reveal the Olympic torch, which was lit by Japanese tennis player Naomi Osaka.

"At the end of the opening ceremony of the Olympic Games, the cauldron 'blooms' to welcome the final torchbearer," said Nendo.

"This expresses not only the sun itself, but also the energy and vitality that can be obtained from it, such as plants sprouting, flowers blooming, and hands opening wide toward the sky." 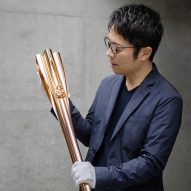 The flame is the first at the Olympics to burn hydrogen. The hydrogen was created through the electrolysis of water using solar power at a facility in Japan's Fukushima Prefecture in the west of the country. Hydrogen produced this way is known as "green hydrogen".

Unlike propane, which has been used as the fuel for previous Olympic flames, hydrogen burns with an invisible, colourless flame.

To create the visible, yellow flame sodium carbonate was sprayed into the hydrogen.

"The amount and direction of the aqueous solution sprayed from the vicinity of the burner were repeatedly examined along with the amount of hydrogen and the angle of the valve," said Nendo.

"[We] adjusted the movement and shape of the flame to shimmer like firewood was stoked; such an attempt to 'design flames' was unprecedented."

The use of hydrogen, which burns without producing greenhouse gas emissions, for the Olympic flame was one of several initiatives at this year's games designed to reduce the environmental impact of the event.

The Olympic podiums and medals have been made from recycled materials and the majority of venues that will host events already existed, including several venues built for the previous games in 1964.

Despite these efforts, the co-author of a recent peer-reviewed report told Dezeen that the efforts were "greenwashing".

At the last Olympics in Rio de Janeiro, American artist Anthony Howe created a large kinetic sculpture that complimented the modest-sized cauldron, while the Thomas Heatherwich-designed cauldron for the 2012 games in London was formed of 204 copper petals that combined to create the flame.