A group of UK architects, developers and contractors have called for compulsory whole-life carbon assessments of buildings in a bid to tackle "hidden" emissions caused by construction supply chains.

The Part Z group of sustainability specialists, which includes authors from the Royal Institute of British Architects and the Institution of Structural Engineers, this week launched a proposal for a new section called Part Z to be added to the building regulations.

The initiative also called for limits on upfront emissions to be imposed by 2027. It is supported by architects Feilden Clegg Bradley Studio, Arup and Allies & Morrison and contractors including Laing O'Rourke, BAM and Willmott Dixon.

"Regulating embodied carbon is vital for the construction industry in tackling the climate crisis," said Tim den Dekker of Feilden Clegg Bradley Studios. "The industry is ready for this."

The group is calling on industry leaders to support the proposals, which are published on the part-z.uk website.

The proposed new Part Z would cover any building project over 1,000 square metres. Projects would need to disclose their embodied carbon emissions, which include all emissions caused by the extraction and processing of materials as well as the construction process itself.

“For too long, embodied emissions in construction have been hidden in the built environment," said Tor Burrows, executive director for sustainability and innovation at property developer Grosvenor.

"With today’s call, the industry is asking for regulation to ensure that every significant UK development tracks and limits its full carbon footprint," she added. "We already do this for our large development projects and the time is right to introduce legislation for the whole industry.”

Embodied carbon emissions released before a building is complete can account for half the total emissions, with operational emissions making up the rest. In total, the built environment is thought to be responsible for around 40 per cent of global CO2 emissions.

Construction materials such as concrete and steel have high embodied carbon, with cement causing an estimated eight per cent of global emissions.

Reducing embodied carbon is a key part of ensuring buildings have net-zero emissions. "Around 10 per cent of our national greenhouse gas emissions are associated with construction," said Chris Carroll, net-zero buildings leader for Arup UK.

"To reduce embodied carbon impacts in line with the national net-zero 2050 pathway, we need firm, supportive legislation which sets out a clear requirement to measure, report, and reduce against aligned targets."

The committee called for "a plan for phasing in mandatory whole-life reporting followed by minimum whole-life standards for all buildings, roads and infrastructure by 2025."

The independent committee, which advises the government on climate policy, also called for policies "to drive more resource-efficient construction and use of existing low-carbon materials, including a substantial increase in the use of wood in construction". 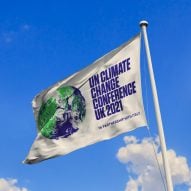 It also called for a review of the proposed inclusion of structural timber in new rules banning combustible materials in construction.

“Over the last two years, developers, designers and contractors have come together from across construction to tackle the climate crisis at an unprecedented pace," said Will Arnold, lead author of the Part Z proposal and head of climate action at the Institution of Structural Engineers.

"We are ready for embodied carbon regulation, and we hope that the government will engage with industry to introduce Part Z into law.”

Built-environment emissions will be on the agenda at the UN's COP26 climate conference in November, which for the first time will feature a day dedicated to the sector.

However, UN climate champion Nigel Topping has expressed frustration at the lack of engagement by architects in the drive towards a net-zero economy.

Meanwhile, just six per cent of RIBA architecture firms have signed up to the body's 2030 Climate Challenge, which is aimed to help them deliver net-zero buildings. Foster + Partners, Grimshaw Architects and Zaha Hadid Architects are among practices that have failed to sign up.