A panel of leading women in product design discussed their experiences of working in the field in this live talk produced by Dezeen for Philips TV & Sound.

The talk was moderated by Dezeen's deputy editor Cajsa Carlson, and explored the challenges that women in the field of product design face as well as how gender parity in the industry can be improved.

Titled Women in Product Design, the talk is the second in a series of four by Dezeen and Philips TV & Sound exploring issues at the cutting edge of the industry. 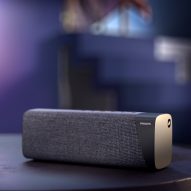 According to a survey undertaken by US professional organisation AIGA and Google in 2016, women account for 44 per cent of the design workforce worldwide, and earn an average of six per cent less than their male counterparts. Meanwhile, not-for-profit consultancy Creative Equals states that only 17 per cent of creative directors worldwide are women.

A 2018 report by Design Council found that men account for 95 per cent of the product and industrial design workforce in the UK, despite the fact that 63 per cent of the country's art and design students are women.

She previously worked at Marcel Wanders Studio in Amsterdam, where she designed products for brands including Moooi, KLM, Cappellini, Magis, and Louis Vuitton.

Grahner is also the founder of her own eponymous product design practice, through which she has designed furniture for Los Angeles design firm Mashstudios.

Johansson is chief design officer at Electrolux, where she leads a team of 200 designers. She joined the brand in 2008 as head of design for its major appliances division in the Asia Pacific region, before moving to Sweden in 2014 to lead its global home care and small domestic appliances division.

Prior to joining Electrolux, Johansson acted as the head of Philips Design Singapore. She holds a master's degree in industrial design from the University of Gothenburg in Sweden, and has also worked at design consultancies in the Netherlands, France and the US.

Koenders founded design and branding consultancy Joerka in 1999 after graduating from the Institute for Fashion, Management and Design at the Hogeschool van Amsterdam.

Through this practice, she works as a consultant in areas including brand strategy, trend forecasting and CMF (colour, materials and finish) design with clients including Philips TV & Sound, Vodafone, Renault and Amsterdam's Hotel de l’Europe.

This talk follows the first part of Dezeen's collaboration with Philips TV & Sound, What is European Design.