Architecture studio Snøhetta has completed an extension to Denmark's Ordrupgaard Museum, uniting the original country manor building and a 2005 Zaha Hadid addition with new subterranean galleries that make a sculptural protrusion into the landscape.

Located north of Copenhagen near the forest park Jægersborg Dyrehave, the Ordrupgaard Museum is dedicated to French and Danish art from the 19th and early 20th century.

Its original world war one-era building is a three-winged neoclassical country mansion that houses the permanent collection, while special exhibitions are presented in the adjacent Zaha Hadid-designed modern extension, which is made of glass and black lava concrete.

Snøhetta's new addition links these two buildings with five new underground gallery spaces and several landscape interventions, all intended to provide a "holistic and continuous path" throughout the museum and its grounds.

Three of the new gallery spaces are dedicated to one of the Ordrupgaard Museum's drawcards, its collection of French impressionistic paintings — an art style that Snøhetta references in the section of the structure that can be seen from outside.

This steel-coated structure is cut into multiple facets that are polished in different directions. They create a play of light that the Norwegian architecture firm intended to reflect the impressionists' preoccupation with capturing the changing qualities of light.

The steel structure, dubbed "Himmelhaven" ("Heaven’s Garden") by the architects, has a different look throughout the day and in different seasons.

The studio also tried to give it the appearance of an object that has been semi-excavated from the ground below.

"Just like a hidden treasure that reveals itself as it appears during excavation, the structure glistens in the landscape," said Snøhetta.

Through this structure, there is a diagonal cut — a bridge, paved in natural stone, that intuitively leads visitors from the garden to the main entry. 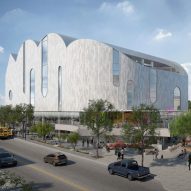 Around it, a half-sunken "mini-atrium" with steps welcomes visitors to sit, rest and enjoy the views of the century-old grounds around it.

On one side is an English-style park with deciduous trees and on the other, a more formal French-inspired rose garden, which Snøhetta took care to safeguard during construction.

The firm also added to the landscape, particularly in the area around Hadid's extension, which it says it has "excavated somewhat" from the landscape, while planting meadow flowers on the surrounding hillside.

Gypsum boards are mounted over the walls to allow the museum to easily change the artworks and colour palette in the space.

Snøhetta describes its overall extension as providing "a comfortable and intuitive museum journey that is accessible and tangible for all".

"Through its subdued yet powerful design, the Ordrupgaard extension by Snøhetta respectfully blends in with its existing surrounding, whether vegetal or built, historic or contemporary, all while adding its own interpretation of time and space and bringing all elements together in a circular and enhanced museum experience for future generations to enjoy," said the architecture firm.

Snøhetta is an international architecture and design studio. It was founded by architects Kjetil Trædal Thorsen and Craig Dykers in 1989 and is headquartered in Norway.

It has recently completed another glittering building — the Le Monde Group headquarters in Paris — while its Children's Museum in El Paso features a barrel-vaulted roof that almost resembles a drawing of a cloud.

Photography is by Laura Stamer.