A cedar-clad dwelling on Long Island that was originally designed by famed US architect Charles Gwathmey has received a sensitive refresh by New York studio Worrell Yeung.

The House in the Dunes is located in the Hamptons beach town of Amagansett. Formerly called the Haupt Residence, the dwelling was designed in the 1970s by Charles Gwathmey, a noted modernist architect who died in 2009.

Worrell Yeung, a Brooklyn-based firm, was tasked with updating the home to meet the needs of a new owner while preserving the integrity of the original design. Gwathmey's drawings served as a guide throughout the project.

"We were very excited when we got the call about the house – especially given that it was in its original condition, totally untouched," said studio co-founder Max Worrell. "Our intention, at first, was really to do as little as possible."

Situated on a one-acre site with ocean views, the rectilinear, 4,400-square-foot (409-square-metre) home has two levels and a basement. Facades are wrapped in grey cedar and large stretches of glass.

Exterior work entailed a full refurbishment of the building envelope. The roof, siding, doors and windows were all replaced, as was the deck surrounding a generous swimming pool.

Within the light-filled home – which has four bedrooms and a den/library – the architects used materials that were sensitive to the original finishes.

In the kitchen, for instance, the team swapped out laminate countertops with Corian in a glacier white hue. The kitchen floor is covered in full-body porcelain tiles from Lea Ceramiche. 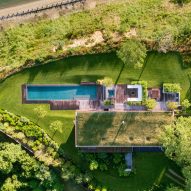 Ten of the best homes in the Hamptons

The most notable spatial change to the home was the removal of a half wall between the kitchen and living room, resulting in a more open public area.

"This small move was one of the most significant changes made to the original structure," the architects said.

Other modifications include a redesign of the living room's fireplace wall, where shelving and a television were removed to provide a cleaner surface for displaying art. The team also restored the room's built-in furniture and coffee table.

The architects made sure to preserve the dwelling's strong connection to the coastal landscape.

"The house's interiors have a direct connection between the indoors and the outdoors, extending beyond the polygonal pool to the ocean," they said.

The home was sold in July after being put up for sale earlier this year. The asking price was $9.25 million (£6.67 million), according to the Wall Street Journal.

Other recently completed projects in the Hamptons include a waterfront home by KOS+A wrapped in teak and charred cedar and a holiday dwelling by MB Architecture that is composed of stacked shipping containers.

The photography is by Naho Kubota.

More from the Hamptons