A towering, floor-to-ceiling bookshelf made from 100 pieces of CNC-cut pine creeps up one side of this writer's cabin in the north of Madrid by Mudd Architects.

The Barcelona-based practice was commissioned to create a studio in the garden of a local children's book author that could serve as a source of inspiration for her future books.

Longlisted in the small building category at this year's Dezeen Awards, the cabin features an asymmetrical pitched roof clad in oxidised iron that is bookended by a wall of glass on either side.

Its interior is panelled in dark maple wood to contrast against the lighter pine that was used to form the parametrically designed bookshelf, which curves up towards the ceiling, following the line of the gabled roof.

In order to determine the most efficient and discreet construction for this storage wall, Mudd Architects worked with a digital fabrication studio in Girona to test different assembly methods.

"The most challenging part but also one of the most important parts of the house is the highly complex, curvy bookshelf adapted to the very specific, high sloped roofs of the house," the studio explained.

"These bookshelves create a sensation of movement, held still in time, where the heavy weight of both the horizontals and verticals is counterbalancing the weight of the high roof." 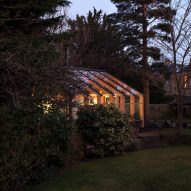 The cabin's generous glass walls provide expansive views into the garden, helping to bring the outdoors inside. To further enhance this connection, the terrace features the same wooden floor as the interior.

The interior is sparsely furnished and heated by a black cast-iron stove, which hangs from the highest point of the roof.

Dimmable LED lighting emphasises the expansive volume of the roof and the perimeter of the terrace, while smaller spotlights are placed inside the bookshelves.

A third, narrow window at the centre of the iron facade provides additional natural light.

Other projects longlisted in the small building category of the 2021 Dezeen Awards include a bridge built by robots, a woven bamboo canopy and a cabin hotel in Jiangxi formed from zoomorphic pods on stilts.

Photography is by Nacho Villa.