Danish homeware brand Vipp has expanded into food by creating a venue for pop-up supper clubs inside the former Viking pencil factory in Copenhagen.

Set to launch during annual design festival 3 Days of Design, Vipp Pencil Factory is a 400-square-metre showroom space that will host guest chefs from around the world, creating a dining experience for up to 26 guests.

Located in lslands Brygge, the pencil factory had been closed down since the 1970s, when Viking – the manufacturer behind Denmark's ubiquitous yellow school pencils – was taken over by a rival company.

Mølsgaard's design sees the large industrial space become more cosy and intimate, with the introduction of wooden furniture and flooring along with tactile fabrics in the form of curtains, rugs and cushions.

The food will be made in Vipp's modular V2 kitchen, which sits at the centre of the space.

Wide concrete steps lead up to the dining space, where a long table with a matching limestone surface is accompanied by swivel chairs in black leather. Folded paper pendant lamps hang overhead, while large windows provide the backdrop.

This understated colour palette extends to the lounge areas, where visual interest is provided by original artworks, ceramics and sculptural furniture pieces.

There's also a grand piano, which creates a space for music performances.

"I set myself free to play around and experiment with a complimentary mix of Vipp classics, upcoming products, and prototypes," said Mølsgaard.

"Vipp Pencil Factory acts as sort of a testing lab where we can try out new ideas, forms and materials in unconventional ways."

The project is the latest in a series of new ventures for Vipp, which started out as a manufacturer of metal pedal bins.

The brand now also offers hotel stays – either in a prefabricated micro cabin in a Swedish forest, or in a loft apartment on top of its Copenhagen headquarters. 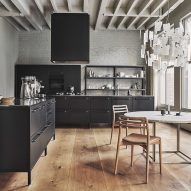 Vipp Studio in Manhattan functions as both showroom and apartment

Vipp also recently launched a hybrid showroom in New York, which is used as both an exhibition space and a pied-à-terre for owners Sofie and Frank Christensen Egelund when they're in town.

The Viking pencil factory pop-up marks its first venture into the restaurant industry.

Vipp Pencil Factory will officially launch on 16 September, during 3 Days of Design, with a public bar.

The first supper club will then be held on 23 September, with a dinner prepared by Italian chef Riccardo Canella, a former R&D sous chef at Noma.

Photography is by Anders Schønnemann.