Architects Frank Maali and Gemma Lalanda have turned a 1950s garage into an events space at homeware brand Vipp's Copenhagen headquarters, which opened during the 3 Days of Design festival.

Called Vipp Garage, the architecture duo's design was informed by the industrial Island Brygge neighbourhood where it is located.

It has steel-clad walls and a polished concrete floor, with large glazed window panes that open it up towards two separate courtyards.

"We wanted to keep [the design] rough because it is a reference to the industrial area and that's why the materials should maintain that aspect – rough concrete, bricks, steel plates and a metal construction," Maali told Dezeen.

"We also wanted to link the building to the existing buildings in the courtyard, including a stable that is from 1906," he added.

"We created the big glass facades to have a visual contact and visual connection from one building to the other."

The building will now be used as an event space and "cultural hub", with Vipp planning to put on concerts, talks and supper clubs in the former garage.

As part of its renovation, the studio changed the layout of the existing building, extending it into an existing courtyard on one side to create space for an additional courtyard.

While the exterior has a clean, white facade, the interior has been clad in dramatic patinated steel plates, with a floor made from polished black concrete that includes visible black pebbles.

Maali and Lalanda also added a vaulted brick ceiling to the 4.5-metre-high space.

"The brick ceiling is the kind of thing you would have seen in stables in Denmark over 100 years ago," Maali said. "Eventually we will add lights above it to create a star ceiling effect." 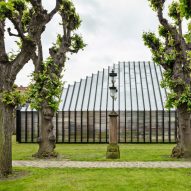 Maali, who also worked as the builder on the project, also created a staircase that leads to the building's technical areas.

Describing it as a "pulpit s'taircase, he said it "adds a sacral feeling to the space".

The 300-square-metre project also included the creation of a rooftop terrace with a small greenhouse pavilion, which Vipp will use for events and to showcase its kitchen designs.

The homeware brand's headquarters, which is located in a former pencil factory, already includes a one-room hotel called Vipp Pencil Case, and the company has also hosted supper clubs in the building.

Vipp Garage opened at Snorresgade 22, Copenhagen, during 3 Days of Design. See Dezeen Events Guide for an up-to-date list of architecture and design events taking place around the world.