Indian architecture office Red Brick Studio has completed a house in the Western Ghats mountain range featuring a curved roof that is lifted above pigmented-plaster walls.

The Cove House was designed as a retreat for a client who wanted to escape his busy life in the city and enjoy weekends in the mountainous region near Pune.

The property is built on a hillside surrounded by dense forest overlooking the nearby Panshet Dam. Red Brick Studio developed a design that utilises the site's slope to partially conceal the building.

"Upon seeing the site and its surrounds, our first response was to create a built form which would try and blend in rather than stand out," the architects claimed.

"Rather than typically using the flat part for construction, we proposed to set the house beyond this zone and use the natural topography of the site to tuck away majority of the house from the view at the entrance."

From the entrance level, most of the building is hidden from view down the slope. Walls that emerge from the earth form a solid mass topped with the slender roof that is supported by angled columns.

Between the walls and roof, a row of clerestory windows maintains the view towards the valley through the building and allows plenty of daylight to reach the internal living areas.

The external walls are finished in a rough plaster made using a red pigment that matches the earthy tones of the surrounding mountains.

The roof form is constructed using reinforced ferro-cement to create a curved form that channels rainwater into a series of ponds, so it can be stored for irrigation in the drier months.

"The approximately 25-metre-long ferro-cement roof is constructed with a structural thickness of just 50 millimetres," the architects pointed out, "making it a very cost effective and sustainable alternative to conventional reinforced cement concrete technology." 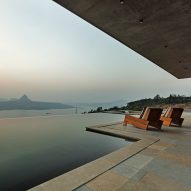 The house is entered via a sunken courtyard featuring stepped planters that contain vegetation and boulders sourced from the site.

The courtyard forms an extension of the main living space, which can be entirely opened up to the outdoors.

Custom-built doors made from folded sheet metal disappear into cavity walls on either side of the 10-metre-wide room, creating a seamless connection with the courtyard.

The other side of the living area is lined with glass doors that can also be retracted to open the space up to an adjoining terrace with expansive views of the natural surroundings.

The central social space is flanked on one side by two en-suite bedrooms. An arched opening on the opposite side that mirrors the profile of the curved ceiling provides access to a kitchen, another bedroom and a staircase leading to an enclosed private terrace.

All of the internal walls are finished in polished oxide in white or a range of complementary shades. The green metal staircase, stone flooring and wooden doors all contribute to a palette informed by the natural surroundings.

Other houses in India that offer panoramic views of a mountain range include a house by Matra Architects located in the foothills of the Himalayas.

The photography is by Hemant Patil.