Human hair can be a tool for measuring the toxicity of a city, according to London-based architects Deborah Lopez and Hadin Charbel, who have also created a textile made from hair.

Through their research studio, Pareid, Lopez and Charbel have been analysing hair samples as a way of mapping the levels of pollution across different areas of Bangkok. Samples containing larger quantities of heavy metals indicate higher levels of environmental toxicity.

"We were interested in the capacity of the human body to become a sensor to this, to reflect and record the environment where you live, where you breathe, and where you eat and drink."

The project, called Follicle, started out as an investigation into the potential of hair as an architectural material.

Research suggests that around 6.5 million kilos of waste human hair is produced in the UK alone every year, so Lopez and Charbel felt this material could be an untapped resource for sustainable construction.

However, after learning about the presence of heavy metals in hair, the pair realised they could also use the substance as a research tool in cities with dangerously high levels of pollution.

They set up their first test station in Bangkok, a city that hit the headlines in early 2019 after high levels of smog forced all of its 437 schools to close.

The architects created an installation at Bangkok Design Week 2019, inviting visitors to voluntarily cut off a small amount of their hair and submit it for analysis, along with details about their day-to-day environment.

As the hair toxicity is affected by lifestyle choices – smoking and dying your hair both led to increased metal content, for instance – visitors were asked to also provide some anonymous information about themselves.

Although there was some reluctance, Lopez and Charbel were surprised by how many people were willing to donate their hair. They ended up with hundreds of samples.

The toxicology analysis suffered long delays, as a result of the Covid-19 crisis unfolding at that time, but when they finally received the results they were able to see significant links between certain types of environment and certain metals. 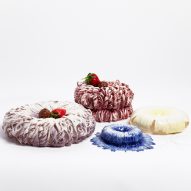 For example, people who lived near major highways were found to have a notably higher volume of arsenic in their hair.

"From that moment we were able to link these two stories together, hair toxicity and pollution in the context of Bangkok," said Charbel.

The architects have been using the information gathered to produce a "toxi-cartography", an interactive 3D map of the city that charts the varying toxicity across different areas. This is available to view on a dedicated website.

The pair are currently presenting their research within the Spanish Pavilion at the Venice Architecture Biennale.

Going forward, Lopez and Charbel hope to be able to set up test stations in more cities, so that they can start to build up a wider understanding of the links between urban conditions and hair toxicity.

At the same time, the architects are also continuing to explore ways that waste hair can be used in building construction.

They have used a felting machine to create a hair textile, which has featured in both the Bangkok and Venice installations. Lopez suggests that this felt could be used as an insulating material, or as some kind of acoustic panelling.

The main obstacle to overcome is the stigma surrounding the cleanliness of hair, Lopez said.

"We find it interesting that we feel comfortable with the hair of non-humans, with animal fur, but we feel so disgusted by our own hair," she stated. "We want to find a way to use this material to create something that people feel attracted to."

Human hair has been used in a number of recent design projects, including designer Céline Arnould's ceramic vessels cast from the hair of her friends and family and a collection of bricks made from hair and manure.