Named the Windcatcher, the structure would contain more than a hundred rotors stacked vertically within a 300-metre-high framework.

According to the company, one Windcatcher could produce as much energy as five of the strongest floating turbines in existence while halving the price of the energy generated in the process.

Wind Catching Systems aims to deploy the first structure within the next three years.

"Our goal is to enable offshore wind operators and developers to produce electricity at a cost that competes with other energy sources, without subsidies," Wind Catching Systems CEO Ole Heggheim told Dezeen.

"We can produce electricity for a cost per kilowatt that is similar to what the other floating technologies are planning to achieve in 10 years."

Unlike turbines that are placed on fixed foundations in shallow water, floating turbines can harness energy from higher winds that occur above the deep, open sea.

However, due to their huge blades that can measure up to 115 metres long, these floating turbines generally max out at wind speeds of around 11 metres per second.

Wind Catching Systems hopes to make floating wind farms more efficient by instead relying on a larger number of smaller turbines with 15-metre-long blades, which can perform more rotations per minute and harness higher winds of up to 17 to 18 metres per second, generating more energy.

"At 11 metres per second, the wind has an energy of about 350 watts per square metre," Heggheim explained.

"And at 17 metres per second, the wind has an energy of 13,000 watts per square metre, so we are harnessing the exponential power of wind."

In the Windcatcher, 117 of these smaller turbines would be set within a steel framework and mounted like a sail on a semi-submerged trimaran boat.

The sail would be fixed to a rotating turret, allowing it to turn in the direction of the wind.

By placing the turbines in close proximity, the Windcatcher could make use of the multirotor effect, where the turbulence created by one turbine can be harnessed by the surrounding ones, maximising the amount of energy they can generate.

"There's a turbulence synergy between rotors," Heggheim explained. "Ten turbines in a network will produce more than the sum of ten individual turbines."

In total, one Windcatcher could produce enough energy to power 80,000 households while reducing the amount of surface area taken up in the process by 80 per cent, the company claims.

Under ideal conditions, Wind Catching Systems says the unit could produce up to 400 gigawatt-hours of energy per year compared to the 80 gigawatt-hours generated by individual floating turbines such as the Vestas V236, which is the largest and most powerful on the market.

The price of energy from floating turbines is currently still higher than from other renewable sources, due to the costs associated with installing and maintaining their gigantic rotors and the large, floating substructure that holds them aloft.

But by combining readily available, off-the-shelf technology and stacking multiple rotors on top of a single platform, Heggheim argues the Windcatchers will cost less to produce than individual floating turbines while having a longer lifespan, ultimately lowering the energy price for consumers. 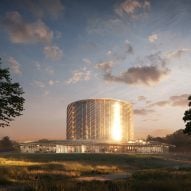 "By having one unit producing as much as energy five, you're saving on four installations and four mooring systems," he added.

"We can construct our Windcatchers near shore and then tow them into place, whereas for conventional wind turbines you often need to have specialised vessels doing the installation offshore."

The units are designed for a lifespan of 50 years compared to the 20 years of a traditional turbine while an integrated elevator system in the sail allows individual rotors to be replaced without the need for an external crane.

Wind power needs to be scaled up three times faster

Wind Catching Systems, which was founded in 2017, is working with the Institute for Energy Technology and service company Aibel to commercialise the design, with a pilot set to be commissioned in 2022 and expected to set sail by 2024.

Last year marked "the best year in history for the global wind industry" with a 53 per cent increase in capacity compared to 2019, according to a report by the Global Wind Energy Council.

But the report also warned that the world needs to be installing wind farms three times faster over the next decade in order to reach its net-zero targets.

Other innovative designs that are hoping to scale up the abundant power of wind include an omnidirectional turbine that works in the centre of big cities and a self-sufficient street lamp that reduces light pollution.