Inexpensive materials such as salvaged plywood feature in a compact apartment in Madrid that has been overhauled by Spanish firm CumuloLimbo Studio.

The project, called UpHouse, entailed an extensive redesign of a small apartment in Madrid's Hortaleza district.

The clients, a young couple, wanted to create more space by raising the apartment's ceiling and adding a second level. They turned to local firm CumuloLimbo Studio to design the fit-out. The project had a tight budget of $39,000 (£28,334).

To prevent the unit from feeling too dark and cramped, the studio suggested adding a mezzanine rather than a full floor.

"UpHouse is the tale of an implant – the introduction of a space of intimate scale into another space, which, within a domestic diagram, is exposed and social," said the architects.

The team removed the plasterboard ceiling and, over a central bathroom, inserted the loft space, which holds a bed, closet and vanity.

The loft is supported by steel columns and beams, which were left exposed. The floor and walls are clad in deconstructed, plywood shipping crates that were once used to transport electronic equipment.

The sides overlooking the lower level of the apartment were left open, with the exception of a few cables.

The loft is accessed via an unusual staircase that terminates atop a kitchen counter. To reach the floor, a black step stool can be pulled up to the counter and stashed away when not in use. 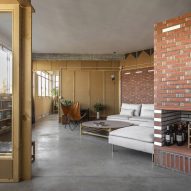 "The new upper floor divides the apartment into two spaces, a private and a public function," the team said. "The choice of materials for these two spaces reflects this duality."

To the east is a revamped kitchen and living area, where white walls reflect light from an adjoining patio, creating a bright atmosphere.

The other side of the unit holds a music studio. Plywood-covered walls lend an intimate feel to the space.

Getting light into the upper level of UpHouse was a significant concern. In response, the team hung an installation in the music studio composed of mirror-lined, wooden slats.

"In order to maximise natural light in the new upper level, a mirror-faced wood vault is built in the private side," the team said. "Natural light is reflected and multiplied with a great visual effect."

The team also updated the apartment's bathroom by adding geometric tiles and a new vanity.

Other apartments in Madrid include a unit by Nomos inside an old workshop that features tactile bricks and pinewood partitions, and a plywood-lined apartment by Husos Arquitectos that totals 46 square metres.