Dark grey walls and a crisp silhouette define a residence created by US firm Side Angle Side for Texas-based architectural photographer Casey Dunn.

It was designed for a discerning client – Casey Dunn, an Austin native who has photographed work by Clayton Korte, Lake Flato Architects, and other leading studios in Texas and beyond.

When Dunn first asked local architect Arthur Furman to design the house, Furman was working at his father’s architecture firm, Furman & Keil Architects. The commission spurred him and his wife, Annie-Laurie Grabiel, to start their own practice, Side Angle Side.

Initially, the house was meant to be a bit smaller, but Dunn got married during the course of the project, necessitating a slightly larger abode.

"The original project brief was less about bedrooms and bathrooms, and more about the character of the home – specifically, the shape," said the architects.

The dwelling has a restrained appearance that was influenced by the minimalist structures found in Marfa, Texas – where Dunn spent time shooting houses for the book Marfa Modern.

Inspiration also came from a house in a Maine forest that Dunn photographed early in his career. It was a simple box with a pointy roof.

"The house was a basic shape, as one would draw as a child," the architect said. "He had been interested in that shape ever since."

In response, Casa Casey has a rectangular plan and a gabled form. Its standing-seam metal roof is nearly flush with the side walls, giving the home a particularly crisp silhouette. 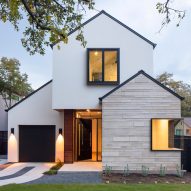 The street-facing elevation, which faces west, is fronted by a permeable driveway. The main entrance is found on the building's north side, where a Douglas fir door sits within an entry cove.

From the foyer, one rounds a corner and steps into a double-height space for living, cooking and dining. A salvaged wooden beam stretches overhead.

A wood-burning stove occupies one corner of the lofty public zone. Its black hue contrasts with the room’s light-toned finishes. On the north, a glazed sliding door provides access to a rear deck.

Neutral colours and earthy decor are found throughout the dwelling, including flooring made of reclaimed longleaf pine.

In the kitchen, cabinets are made of white oak, and counters are topped with soapstone. A cast-in-place concrete wall serves as a backsplash.

The main bedroom suite is sparingly adorned and features a window overlooking the living area below. A glass door leads onto a balcony that was cut into the roof and is shaded by wooden slats.

A barn door separates the sleeping area from the bathroom, where the team installed white oak cabinetry and a vintage clawfoot tub.

Overall, designing the home was an exercise in simplicity and restraint, the architects said.

"As architects, we always getting in our own way by trying to show off and over complicate things for no reason," they explained. "This project required us to step aside and surrender to the simplicity of it."

Other homes in Texas include a brick, mid-century residence that was updated by Clayton & Little, now called Clayton Korte, and a remote dwelling by Michael Hsu that is clad in local stone and charred wood. Both projects were photographed by Dunn.