Design studios Crafting Plastics and Office MMK have teamed up to develop a scent-infused 3D-printed room divider made from bioplastic that is currently on show at Salone del Mobile.

BreaZea is showing as part of The Makers Show at Salone del Mobile, which showcases work by designer-makers, and consists of modules in two different designs that can be combined however the user wants.

The organic-shaped room divider was 3D-printed using one of Crafting Plastics' Nuatan bioplastics, which are made from blends from the PLA and PHA biopolymer groups.

BreaZea was designed as part of a larger project to let people smell bioplastics, which are normally odourless.

"We were wondering, together with the German architect Moritz Maria Karl of Office MMK, how to bring a new identity to bioplastics, since normally you perceive these materials through their visuality and structure, not through their smell."

Wanting to create a scent for bioplastics that would make people associate it with something pleasant, similar to fresh wood, Crafting Plastics began thinking about what could be an appropriate smell for this new material.

The bioplastic used for BreaZea is made from cornstarch and sugar and when it's heated up, it has a "starchy, sweet, baking-bread like smell" which the studio says is unique for starch and sugar-based biopolymer blends.

Crafting Plastics therefore worked with scientist Karol Červenčík to develop a smell for BreaZea that would be reminiscent of the material's origins.

"It smells maize-y, caramel-y and sugary," Kubušová said. "This is actually the scent that we feel when the material is processed and we can smell it because it's heated up, but otherwise you wouldn't normally smell it." 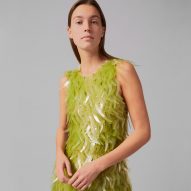 To create the scented room divider, the studio is experimenting with both oil-based and water-based scents, which are added either to the bioplastic material itself before it it is 3D-printed or to the finished product.

"We're 3D-printing it and putting the scent onto the finished material, while another option is to encapsulate scents into the material," Kubušová said.

"This will stay in the material for longer. We're currently developing this process, but it looks like it will work."

BreaZea's shape – an organic design that recalls corals and leaves – was created to evoke the way it smells.

"We really wanted to find a way in which to express the smell itself," Kubušová explained. "For us, the scent was something that doesn't have a regular shape but goes from very tiny places and spreads around, and which can be connected in different ways."

"So that was the idea, but it's really freely sketched."

When it has come to the end of its lifecycle, the BreaZea can be placed in an industrial compost, where it will biodegrade in 60-120 days, Kubušová said.

Crafting Plastics hopes the design will be available for purchase in a month.

Bioplastic projects are becoming more common, with other recent projects including a couture dress adorned with algae sequins and a bioplastic made of forest and farm waste.

Photography is by Adam Sakovy.

BreaZea will be on display at The Makers Show in Milan until 10 September as part of Salone del Mobile. See Dezeen Events Guide for an up-to-date list of architecture and design events taking place around the world.