A courtyard designed to create an "idealised atmosphere of the Pacific Northwest" sits at the centre of this house in Seattle by local architects Chadbourne + Doss.

Named The Perch, the three-storey house is located in the city's residential Queen Anne Hill neighbourhood. Facing west to enjoy views of the Puget Sound and the Olympic Mountains, the home encircles "a courtyard that encapsulates an idealised atmosphere of the Pacific Northwest," according to Chadbourne + Doss.

This central outdoor space is accessed by pivoting open a large cedar door, revealing a mossy island and a tree enclosed by board-formed concrete walls.

"One is greeted with the sights and sounds of a water feature with a lush island, walnut swings that float over the water, and a patio with fire pit that opens to western views of the [Puget] Sound," the architects added.

The courtyard separates the two wings of the 5,500-square-foot (511-square-metre) home.

The owner's quarters occupy the western half of the house, while the east has space for entertaining guests, or potentially hosting a future caretaker for the residents.

A dramatic suspended staircase connects the two halves, and overlooks the courtyard through a window wall that spans the full height of the building.

Stair treads are made of walnut, while vertical blackened steel rods form balusters that are intended to reference the area's high annual rainfall.

All of the home's bedrooms are on the intermediate level. Here, the architects also included a secondary sitting area and kitchenette, which could be used by long-term guests, family, or a live-in caretaker.

"They wanted a house that would age well, support their active lifestyle, and adapt as they age," Chadbourne + Doss said of the homeowners. 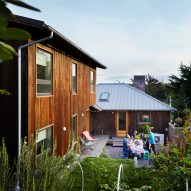 The upper level contains the public areas, which have an open-concept configuration that makes the most of the dramatic sunset views towards the Salish Sea.

"The landscape is ever-changing, with views of the Olympic Mountains on gloriously sunny days and urban vistas in the foreground when the fog hangs low," the architects said.

Sliding glass doors open out onto a covered balcony, which helps residents enjoy the outdoors despite Seattle's frequent rain. On the eastern side of the home, another terrace has a large dining table and a barbecue, offering of the city.

The exterior palette includes board-formed concrete, metal siding, and red cedar, all of which were chosen for their durability and low maintenance.

Chadbourne + Doss also included sustainable features such as high-performance windows, and a photovoltaic array on the roof that produces more energy than the occupants consume.

The minimalist interiors feature muted tones, with tactile accents that include a three-storey plaster surface alongside the staircase and a light-coloured felt wall covering in the owner's bedroom.

Chadbourne + Doss is led by Lisa Chadbourne and Daren Doss, a couple who met while studying architecture at the University of Washington. They established their firm in Seattle in 2001, and also have an office in Astoria, Oregon.

Other homes in Seattle include a modernist floating home on Lake Union by Studio DIAA, and a historical bungalow that was refurbished by Best Practice Architecture.