Leftover gravestone has been reinvented as side tables and sculptural objects in the Teile series, created by German-Spanish studio Anima Ona and exhibited at the Supersalone fair during Milan design week.

The five pieces in the Teile series are made of scrap stone from a German manufacturer, which receives large stone blocks from all over the world and carves gravestones from them. Anima Ona worked with the offcuts from this process.

Two of the pieces are made of limestone, another is travertine, and the others are green-tinged Alpengrün marble and Silbergrau stone.

While keeping the exterior of the offcuts intact, Anima Ona carved negative space into the interior using core drills that extract material in cylinders, creating patterns like a hole punch on paper. Three different diameters of core drill were used to achieve the effects.

Studio co-founder Freia Achenbach told Dezeen that each unique pattern came about as a response to the qualities of the individual stones.

"We never really know in advance what we were going to get – it was like really a surprise every time," said Achenbach. "And then we tried to react to the shape of the stone and to the colour."

"No shape is there twice, basically."

Teile 1-4 share a similarity of form, while Teil 5 adds an additional detail – "drawers" made from some of the extracted shapes.

These are offcuts of offcuts, and slot in seamlessly into the Teil 5 unit to provide small shelves. 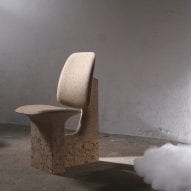 The Teile tables range in height from 36 to 55 centimetres, and can also serve as sculptural objects.

Anima Ona is an emerging design studio founded by Achenbach along with Carlo Kurth and June Fàbregas in 2018.

While Achenbach is based in Stuttgart, Kurth works from Hirschberg, Germany and Fàbregas from Barcelona, Spain. The designers come together for projects and carry out much of their manufacturing in the area around Hirschberg.

"We really like trying to produce things ourselves and thinking a lot about materiality," said Achenbach of the studio's approach.

Teile is part of the The Makers Show at Supersalone – the name of this year's special Salone del Mobile show – which is curated by Stefano Boeri and dedicated to designer-makers.

Elsewhere at Milan design week, Lolita Gomez and Blanca Algarra Sanchez have created a reimagined Korova Milk Bar from A Clockwork Orange, while Bethan Laura Wood has exhibited furniture themed around femininity and the boudoir.

Photography is by Anima Ona.