Treviso-based Carlana Mezzalira Pentimalli designed the Music School of Bressanone, which was founded in 1961 and is one of the South Tyrol region's most important cultural institutions.

The music school is located close to Bressanone's historic centre and forms part of a larger redevelopment of the area, which includes the introduction of a two-level underground car park, a climbing wall, a municipal swimming pool and a public square.

The building lines the northern edge of the future plaza, and incorporates public thoroughfares and a tunnel that will connect the square with the car park and other amenities.

The project comprises a compact volume arranged over three storeys above ground and part of the basement level. This structure emerges above a two-storey structure that wraps around the site.

"To mitigate the impact on the city skyline, the top floor is set back from the line of the external facades, obtaining an optical effect that dissolves the perception of the building," the architects explained.

"The elevations are also conceived as wall faces, whose treatments change in relation to the context, in order to resonate harmoniously with the surrounding buildings."

The main volume is situated to the west of the plot, leaving space for a publicly accessible courtyard area on its eastern side. The wall enclosing the courtyard contains staircases, storage and a kiosk facing the adjacent square.

"One of the peculiarities of the project is the 'garden of music'," the studio added, "a finely decorated open-air room, inside the enclosure and yet outside the volume of the school, which dissolves the boundary between the inside and outside."

The architects claimed that this public space allows the building to better serve the community, adding that it is inspired by the Wunderkammer or "chamber of curiosities" – created from the 16th century onwards for aristocrats and wealthy merchants to showcase collections of rare and exotic objects.

The school's facades are entirely constructed from reinforced concrete that is tinted using red porphyry aggregates and pigments to create a hue that echoes the region's architectural vernacular.

The exposed concrete surfaces were bush-hammered by hand to add texture. Some areas were left smooth to contrast with the rough surfaces, including the frames surrounding various openings and a pattern based on traditional decorations found across the city.

A large opening in the southern wall provides access to the courtyard, while an adjacent entrance leads into a public foyer. The ground floor also contains offices, a rehearsal room, classrooms and utility areas. 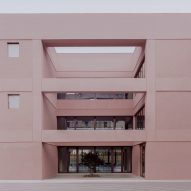 The organisation of spaces on this level creates a sense of separation between the teaching areas and a large auditorium for hosting public concerts, which partially extends into the basement.

A total of 29 music rooms are distributed across the building's three floors, with most of them arranged around a large central corridor.

According to the architects, the school's interior is designed to contrast with the monumental facades and provides a sense of familiarity by referencing the city's historical architecture.

Service areas including the cloakroom and toilets are lined with wallpaper designed to evoke tapestries hung in the historic Bishop's Palace.

The bright and clearly navigable communal areas feature large apertures, lined with pale grey marble that visually connect the various spaces. Comfortable chairs and sound-absorbing curtains lend these areas the feeling of a relaxing lounge for public use.

Staircases and joinery are made from dark-stained oak that recalls the carpentry found in the historic city centre's buildings. The music rooms and auditorium are lined with stained-wood panelling that introduces texture and colour, as well as providing the required acoustic properties.

Michel Carlana, Luca Mezzalira and Curzio Pentimalli all graduated from the Università Iuav di Venezia and founded their practice in 2010.

The firm works on urban planning and architecture projects that reinterpret spaces using an approach that favours simplicity, durability and precision.

The photography is by Marco Cappelletti.