American office ODA has released renderings of a residential building with cantilevered upper storeys, scheduled to be built on Manhattan's Upper West Side.

The 250-feet-tall (76 metre-tall) project is estimated to be completed by next autumn at 251 West 91st Street, according to New York-based firm ODA.

Central to Era's design is a footprint that will increase from small to large as the building's upper storeys cantilever outwards at each higher level.

"The building's cantilevered design will allow for more space as the building rises, which will create much more communal rooftop space," said ODA.

To make use of this large surface area, Era will feature a rooftop swimming pool with views of the Hudson River. 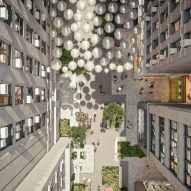 Other communal areas built for the building's residents will include a fitness centre and yoga studio, as well as a library, a lounge and a children's playroom.

Era will be clad in limestone surrounding the large windows that cover the facades, while balconies will be clustered together on various corners of the building that jut out.

"Deep windows with elegant and timeless mullions will blend seamlessly into the surroundings, but upon closer review, the windows will be much larger than average for the area, inviting more natural light into the space and opening the building up to surrounding views," explained ODA.

According to the firm, the interiors will aim to echo the shapes and angles found across the exterior, creating cohesion across the project.

"The building marks a new era on the Upper West Side," said ODA, explaining the tower's name.

Era is one of several New York buildings designed in a blocky formation by ODA, which was founded in 2007.

The firm recently completed a concrete residential building in Brooklyn formed from irregularly stacked boxes, while another housing complex on Manhattan's Lower East Side includes a top-floor footprint that is twice the size of the building's ground-level.

The renderings are courtesy of ODA.