In this video produced by Dezeen for OPPO, Japanese architect Kengo Kuma describes how he worked with the smart device brand to create Bamboo Ring, an installation currently showing at Milan design week.

Bamboo Ring is a two-metre diameter ring comprised of lengths of bamboo that have been bound to a carbon-fibre backing to form a strong, self-supporting structure.

The structure was installed at Cortile del Bagni as part of this year's Milan design week and will be on display until 19 September.

The installation is a continuation of a collaboration between Kuma and smart device brand OPPO that saw a previous iteration of the structure installed in the courtyard of the V&A Museum as part of London Design Festival in 2019.

In an exclusive video interview with Dezeen, Kuma explained how technology was incorporated into the installation to offer visitors a multi-sensory experience.

Motors, speakers and exciters connected to the structure reverberate cause it to reverberate and generate percussive sounds that act as part of a site-specific score composed by Japanese violinist Midori Komachi and architectural sound design studio Musicity.

"It is a pavilion, but at the same time it is a kind of instrument made of bamboo," explained Kuma. "Bamboo is often used for instruments in Asia, and I applied that idea to this pavilion." 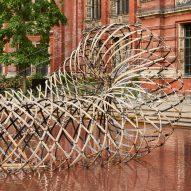 The technology used to transform the structure into an instrument was based on research by OPPO's London Design Centre.

The soundtrack also features sounds from O Relax, an application developed for OPPO smartphones that generates calming soundscapes to help users relax. Visitors to the installation will hear sounds recorded for the app in locations around the world including Reykjavík, Beijing and Tokyo.

Kuma is known for designing architecture projects around the world with his studio Kengo Kuma & Associates, including the cedar-clad Japan National Stadium, which was the centrepiece for the 2020 Tokyo Olympics, and the V&A Dundee.

According to the architect, Bamboo Ring was designed to offer its visitors an introspective experience that sets it apart from other exhibits at Milan design week.

"At Milan design week, most of the products are not so spiritual," he told Dezeen. "I want to give a special spiritual experience to people by using technology and traditional materials."

In future, the structure will be donated to the permanent collection of outdoor art museum Arte Sella Park in Trentino, Italy.

This video was produced by Dezeen for OPPO as part of a partnership. Find out more about Dezeen's partnership content here.