A round glazed welcome centre is among the enhancements made by US firms Machado Silvetti and Fentress Architects to the Gio Ponti-designed Denver Art Museum, which opened in 1971.

The museum sits within the heart of Denver, in a district known as the Golden Triangle. After being partly closed for years, the museum will fully reopen to the public on 24 October 2021.

The modifications include a new welcome centre, outdoor areas and reconfigured galleries, along with additional space for education, events and dining. The project was designed by Boston-based Machado Silvetti Architects and local firm Fentress Architects.

The art museum unveiled the renovation and expansion plan in 2016, citing the need to expand its offerings while unifying its buildings and bringing them up to date. The project was mostly completed last year, but the coronavirus pandemic delayed the unveiling until this fall.

The original museum – a seven-storey, asymmetrical tower clad in shimmering tiles – was designed by the Italian architect Gio Ponti and opened in 1971. It has 24 different sides and has been referred to as "castle-like" in appearance.

"More than one million reflective tiles cover the building's exterior, and its two-towered facade has long been an iconic city feature," the team said.

The building was one of the first high-rise art museums, in addition to being Ponti's only completed building in North America. The architect – known for such works as the 1958 Pirelli Tower in Milan, along with a range of furniture, household items and art objects – died in 1979 at the age of 87.

Long called the North Building, the facility has been renamed the J Landis and Sharon Martin Building.

The Martin Building is not the only structure the architects had to consider while conceiving the overhaul. A spiky, standalone addition to the museum, called the Hamilton Building, opened in 2006 with a design by American architect Daniel Libeskind.

Next to the museum is another notable work of architecture: the postmodern-style Denver Central Public Library, which was largely created by Michael Graves.

The team has said its goal was to respect the context and to honor Ponti's original vision as best as possible.

"To create the new Sie Welcome Center in the architecturally rich context of Denver's Golden Triangle Creative District, it was critical for us to design a structure that was simultaneously in dialogue with the vibrant visual language of Ponti and Studio Libeskind's designs, while also providing connection to the museum," said Jorge Silvetti, principal at Machado Silvetti. 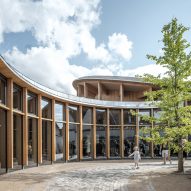 The most visible aspect of the renovation project is the new Sie Welcome Center, which adjoins the Ponti tower.

Rounded in plan, the building rises two levels and totals 50,000 square feet (4,645 square metres). Its shape was inspired by an elliptical auditorium that Ponti had originally intended for the museum.

The upper level is clad in curved, structural glass panels, with each panel measuring 25 feet tall and eight feet wide (7.6 by 2.4 metres). The team described the glazed facade as "an unprecedented feat of engineering and the first building to use curved glass panels in this way".

"With its elliptical shape that is approachable from all angles, and transparent glass facade, the Sie Welcome Center is an inviting and glowing beacon to greet all visitors," said Silvetti.

Inside, the new centre holds guest services, a fine dining restaurant, a casual cafe, educational and event space, and a conservation laboratory.

Within the Ponti tower, two new elevators were installed. All galleries have been upgraded, and a new design gallery was created.

Moreover, a gallery dedicated to Western American art on the seventh floor has been expanded by 9,000 square feet (836 square metres). Also on the seventh level are two new patios, where visitors can take in views of the city and Rocky Mountains.

On the Ponti tower facades, the team swapped out many of the original tiles with replicas, and it replaced windows with energy-efficient versions.

The building's exterior lighting has been replaced with an LED system, one of the many elements that helped the project earn LEED Silver certification from the US Green Building Council.

The tower's original entrance, which features an oval-shaped steel tube, has been restored and will be used for large groups, such as schoolchildren.

Several additional firms were involved in the project.

OMA New York was responsible for exhibitions for the museum's design gallery, and IKD of Boston and San Francisco has designed a special exhibition on the building's main floor. A new learning and engagement centre features "playful, creative and inspired flexible spaces" created by Mexico City's Esrawe + Cadena.

To mark the building's reopening, the museum will present an exhibition titled Gio Ponti: Designer of a Thousand Talents. Designed by OMA and organised by the museum's architecture curator, Darrin Alfred, the show will present objects from the museum's collection. The show opens 24 October 2021 and runs indefinitely.

Located at the base of the Rocky Mountains, Denver has experienced significant growth and development in the past decade. Other recent projects there include a hotel by Dynia Architects that has an off-kilter appearance, and a multi-use complex by Tres Birds that encompasses a full city block.

The photography is by James Florio.