The Italian courts have sided with Molteni&C in a legal dispute against Cassina that saw both brands exhibit the same chair during Milan design week.

The two heavyweight Italian furniture brands have been in court for the last three weeks tussling over the question of who owns the rights to a particular Gio Ponti lounge chair, called the D.156.3 by Molteni&C and the 811 by Cassina.

But at the end of last week the court of Milan confirmed an injunction preventing Cassina from producing, marketing or displaying the chair.

The ruling settles the matter in favour of Molteni&C, pending an appeal from Cassina, which has vowed to take its claim to a higher court.

The D.156.3 chair was launched by Molteni&C – which has an exclusive 10-year agreement with the Gio Ponti Archives – at Salone del Mobile in April as part of its new collection.

At the same time, a near identical version of the chair sat in the Milan showroom of Cassina, which contends it is a co-author of the chair in collaboration with Ponti.

"We would like to point out that this is a precautionary measure and not a definite ruling and therefore subject to a complaint that Cassina is preparing as it considers this provisional measure unfair," said Cassina in a statement.

The ruling on 9 May confirmed a preliminary injunction that had been issued on 4 April. It sets a €5,000 (£4250) fine for each violation of the order.

"It's not just a controversy about one chair – Molteni has invested a lot in the Gio Ponti project," Giulia Molteni, who is head of marketing and communication in the still family-run business, told Dezeen.

The company currently has 16 Ponti pieces in its collection and plans to release more during its 10-year partnership with the Gio Ponti Archives, which began in 2010 and gives Molteni&C exclusivity over his designs, excluding already existing license agreements.

Molteni&C claims to have championed Ponti's designs in the last seven years.

"It has been disappointing and sad as well as we usually have a very good relationship with all our competitors," Giulia Molteni continued.

Ponti's heirs, who administer the archives, joined Molteni&C's side in the litigation.

Cassina also owns several designs by Ponti, one of Italy's most influential designers and architects, who passed away in 1979 at the age of 87.

The brand will be appealing the court's decision. It said that despite the judge, Claudio Marangoni, finding in favour of Molteni&C, he had indicated that more deliberation was needed by a higher court to establish true ownership over the designs.

"The judge stated that according to the ownership rights concerning the 811 armchair that 'the necessity to evaluate within the appropriate court, the need to carry out further assessment of documents and additional expert inquiries' persists," said Cassina, which has now removed the chair from its showroom floor. 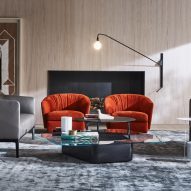 The dispute between the two heavyweight Italian brands became public at the start of this year's Milan design week, when Cassina placed a newspaper advertisement describing its 811 chair as "the original" designed by Ponti and Cassina.

While Cassina had not put the chair into production, it took to displaying a version of it on its showroom floor. The company's claims to the chair stem from its origins in Cassina's factory in the 1950s, when it was allegedly "conceived, engineered and produced" by the company "in cooperation" with Ponti.

It had previously sent Molteni&C a formal notice not to produce the chair – a wooden lounger with a slightly winged headrest.

Molteni&C and Cassina are among Italy's most famous and long-running design brands. Cassina is celebrating its 90th birthday this year, while Molteni&C is turning 83.

The brands have recently been given new direction by international creative directors – Cassina by Patricia Urquiola and Molteni&C by Vincent Van Duysen – which propelled Cassina to a spot on Dezeen Hot List last year.