British designer Tom Dixon explains how he worked with VitrA to create his first-ever bathroom collection in this video produced by Dezeen for the bathroom brand.

Dixon and VitrA collaborated to design Liquid, a range of fittings and furniture that encompasses all elements of the bathroom.

The pieces, which include furniture alongside sanitaryware, taps, tiles, shower systems and accessories, are designed to work together or as stand-alone pieces.

The collection is characterised by a minimal approach to design, with chunky forms and soft lines. According to Dixon, these forms arose from a desire to create a stripped-back collection designed for intuitive use.

"What I'm trying to get to is almost an expressive minimalism, where what you're trying to do is have a very visible functionality and reduce visual noise," Dixon told Dezeen in the exclusive video interview.

"If they've got personality and they feel almost like a comic book representation of the artefact, I think that's a good thing," he continued. "There's something fun about a soft, fat edge."

Amongst the pieces in the collection is a cylindrical white ceramic stool with rounded edges.

"I wanted an object that kind of combines my everyday world of product, furniture and lighting design with a completely different bathroom world, and the stool seemed to be the kind of overlapping item," said Dixon.

"It's an iconic design, but also it gives the option to sit comfortably in the bathroom," added Erdem Akan, VitrA's design director, who was also interviewed for the video.

Also featured in the collection are a range of minimal taps and shower fixtures that come in a striking gloss black finish.

"In the tap world, you're able to do these super high tech finishes called PVD," explained Dixon. "We tested out a few things, the obvious golds and coppers, but the black works quite well as a monster contrast." 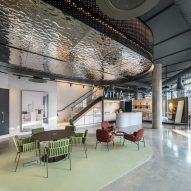 The components of Liquid were designed to be durable as well as minimal.

"The inspirations were really from Victorian roll top baths and fonts in churches – things that are visibly long-lasting," said Dixon.

The designer went on to explain the importance of creating pieces that are built to last.

"The important thing for me right now is really to design for long life, to make things really solid and make them long-lasting," he said.

"You've got to be really careful when you're designing not to make something too fashionable, which will go out of fashion, so trying to find the archetype of something that will last a really long time."

The launch of the collection coincides with the recent opening of VitrA London, which was designed by architecture studio TP Bennett to act as a showroom for the brand as well as a creative hub for architects and designers.

"London is a significant location for VitrA," said Akan. "We have been working in the UK market for the past 25 years and we were waiting for the right time to launch this showroom."

This video was produced by Dezeen for VitrA as part of a partnership. Find out more about Dezeen's partnership content here.