Rammed earth walls and a glass outhouse feature in this rural Ecuadorian house by architectural studio Al Borde that is meant to challenge standards of comfort.

The Casa Jardin, or Garden House, is located in Conocoto, a rural area south of Ecuador's capital Quito. It was designed for a client, José, who studied ecology and desired a home that felt seamless between inside and out.

While conceiving the design, Quito-based Al Borde studied the Cochasquí archaeological site in northern Ecuador, where the architects found replicas of houses built by a pre-Inca civilization.

"The house was structured from a circular, rammed-earth wall built around a Lechero tree of approximately four metres high, planted in the centre during construction time," the team said.

Taking inspiration from the ancient ruins, the studio came up with an unconventional home made of natural materials and afforded a strong connection to the landscape.

The home consists of three separate structures: the main dwelling, a bathing area and a water closet. One must pass through the outdoor garden to access each building.

"José and his house question the comfort standards," the team said. "There are places where people do not know whether they are in a garden or house, or a house built by the garden."

Rectangular in plan, the main dwelling has a single, large room that holds a kitchen, dining area and sleeping quarters. There also is a space for the client's books and drum set.

Rammed-earth blocks were use to form three of the walls. The fourth is made of glass and wood.

"The same soil removed in the excavation was used for load-bearing adobe walls," the architects said. "They rest on a stone foundation that also works as a skirting board."

The roof consists of wooden staves, waterproof fabric, and tiles made of earth and brick. Weeds are intended to sprout up between the bricks.

A front patio is shaded by a large overhang made of a polycarbonate panels and chaguarqueros branches. The canopy is supported by felled Euphorbia laurifolia trees – also known as Lechero trees – that will take root and regenerate. 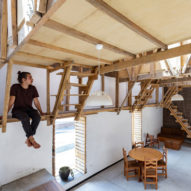 "Over the years, new branches and leaves will grow, allowing the tree to follow its life cycle," the team said.

A simple shower is housed in a greenhouse made of polycarbonate panels and Lechero trunks. Nearby is the outhouse – a glazed enclosure that is sheltered by a canopy held up by tree trunks.

"Pooping for José is a ritual," the architects said. "Between him and nature, there is only glass."

"We imagine that guests will have many anecdotes to tell after visiting him," they added.

The property also features a permaculture system that was developed and built by the client.

Sewage is treated via a system with red worms, and gray water is treated with dwarf papyrus, a type of pond plant. The filtered water is used to irrigate fruit trees.

Moreover, organic waste is turned into compost, which serves as fertiliser for the property's vegetables and medicinal plants.

"Native-wild plants have been kept to attract insects and birds from the area, controlling the proliferation of possible plagues," the client said. "It works as a biological control in situ."

The Ecuadorian studio is also behind the House of the Flying Beds – a renovated 18th-century home that has sleeping spaces suspended from the ceiling.

The photography is by Juan Alberto Andrade.