Estudio Felipe Escudero has built an Ecuadorian house around a central courtyard, which features the firm's first furniture collection.

The 7,535 square feet (700 square metres) Magnolia House is located at the top of a mountain valley in the Los Arrayanas neighbourhood of Puembo, Ecuador.

The minimalist, one-storey dwelling is arranged around a central courtyard that frames a large magnolia tree placed within a plant-covered patio.

Architect Felipe Escudero constructed the house for his mother, whose childhood love of magnolia trees informed the project. "The entire house revolves around the tree," he told Dezeen.

Described by the studio as looking like "a spaceship that has just landed", the large home is topped by a flat concrete slab with large spans and overhangs.

"This allows a traditionally rigid and heavy material to look like it's floating in space," explained Escudero, who also noted that the overhangs provide natural cooling to the spaces below them.

The concrete slab is interrupted only by the home's focal magnolia tree – the top of which can be seen protruding from the central, open-air courtyard.

The concrete roof dips to form sloping walls that partially enclose the courtyard, which is accessed through glass doors in floor-to-ceiling glass walls.

Visitors enter the house via a spacious foyer that faces the courtyard. To the left of the house is a children's bedroom and bathroom as well as the main bedroom, bathroom and walk-in wardrobe.

Beyond the central courtyard on the same side, is an indoor/outdoor living room that is split between inside and outside spaces partitioned by large sliding doors, which lead to a vast deck that overlooks a long swimming pool in the garden.

On the right-hand side of the house, a guest bedroom and bathroom are located next to a smaller bathroom for visitors, while both a main and a secondary kitchen can also be found near the deck.

Flanked by the indoor living room and main kitchen on either side, an open-plan dining space features a marble-topped table and textured chairs from Near Life, the architecture studio's first and almost all-white furniture collection. 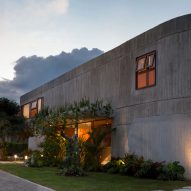 Describing the collection, Escudero said, "it is inspired by nature in a similar way to how the house was inspired by magnolia trees. Each product is designed to feel animated as if it were given a soul".

This furniture includes two bulbous white pouffes that were placed on the deck where visitors can sit and overlook the pool, while other white seating resembling organic forms featurs in the living rooms.

"Handcraft is paired with technology to mould materials in innovative ways to produce effects that change depending on the light and the user's point of view," continued Escudero.

"This results in objects that look like fossils from the future, expressing atemporal traits."

Other highlights are a 3D-printed, glass fibre sculpture, as well as strip lighting encased in a bubble-like, transparent tube.

Reflecting on Magnolia House's atmosphere, Escudero said, "my mother has always had an interest in modern art, so the architecture, interiors and gardens in the home follow this art form."

"They combine hyper-functionalism with playful use of shapes, and magic, almost impossible use of materials."

Felipe Escudero founded his eponymous firm in 2012 after working at other architecture offices including the British Heatherwick Studio and Beijing-based MAD.

Previous projects by Estudio Felipe Escudero include a cheese factory's warehouses and offices that feature a wave-like roof designed to echo the nearby Andes mountains and a Quito house he constructed for himself, which is equipped with space to make rap music.

The photography is by Haley Lee.