Designer Stefan Scholten has aimed to create a sense of luxury out of waste in The Stone House, his first solo project after disbanding Scholten & Baijings.

Displayed as part of Masterly, the Dutch exhibition at Milan design week, the Stone House installation was made entirely out of waste marble and travertine sourced from quarries around Italy.

The waste was fashioned into objects such as walls, furniture and even a stone "carpet" – enough elements to create the suggestion of a full house beyond them.

The pieces feature natural colours and patterns that are unusual for marble. Scholten intended that this element of surprise could spur viewers to see the material in a new light.

The designer is based in both Amsterdam and Carrara, the home of Italian marble, and conceived the project with the brand Stone Made Italy to address the issue of the industry's excess waste.

"We came up with the idea to upcycle marble, but we wanted to do something really special," Scholten told Dezeen. "There are already projects where they glue all kinds of waste material into one slab, but we wanted to get a higher level, almost to create a new luxury."

"Because marble is, of course, always referring to luxury in a way," he continued. "Once you've quarried it you don't get it back. It takes a billion years to create a block of marble."

He hoped the work would divorce the idea of "waste" from its more negative connotations.

"All upcycling or waste material always has this negative spin, which we wanted to transform to a more high-end level," he added.

To achieve these new effects, Scholten revisited centuries-old production methods while experimenting with different combinations of colours and materials.

Working with Morseletto, a factory that takes an artisan approach with highly specialised workers, he tried making terrazzo, palladiana, mosaico and marmorino – all different ways of assembling and using stone.

Saw residue, broken chunks and marble grit went into the Stone House pieces, which present a contemporary take on these traditional techniques.

There is the "carpet", made of imperfect marble waste pieces cut into slabs and assembled into a book-matched pattern, where two mirror-image slabs face each other like the pages of an open book.

There is a coffee table that uses waste stones "almost like a weaving technique" and a bench made of pieces of travertine with the same stone residue used for the grouting.

A dinner table, by contrast, uses the waste pieces as they were found, so they are recognisable as the original stone. 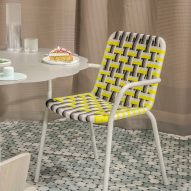 Cement is used as the binding material for the waste pieces, which Scholten defends as the "least worst" option currently available.

The cement industry accounts for around eight per cent of global carbon dioxide emissions, due to both the burning of fossil fuels and the chemical reactions involved.

The designer and manufacturer Morceletto considered alternatives. They dismissed epoxy resin because, when mixed with stone, it would be almost impossible to recycle, as well as bio-resin, made without petrochemicals, because its quality and durability could not be guaranteed.

Scholten even experimented with an old terrazzo technique involving natural rubber cement, but he said he couldn't make it work.

Stone Made Italy founder Manuela Rotta said that while cement was an imperfect choice, she hoped the project would push the industry towards finding more sustainable solutions.

"This is just the first step," she told Dezeen. "We are trying to push the industry in general to consider the beauty of the waste and how it could be reused. And we are also saying, this time, we have to do it with cement."

"This was the most sustainable option available at the moment, and then, shouldn't we be working on something which is also more sustainable, to help to bind the stone, to process it?"

Milan design week took place from 4 to 10 September, with a more low-key event that some designers and exhibitors described as reminiscent of its early years.

Scholten & Baijings ceased working as a partnership in 2019 and now operate under their individual names.

Masterly: The Dutch in Milano took place at Palazzo Francesco Turati from 4 to 10 September as part of Milan design week 2021. See Dezeen Events Guide for an up-to-date list of architecture and design events taking place around the world.