Speaking to Dezeen, McAulay said that if the industry is to help alleviate climate change, emerging architects must be taught how to eliminate carbon emissions from the built environment, which is responsible for around 40 per cent of all greenhouse gas emissions.

A failure to do this so far has left a "massive knowledge gap in the industry" in which many architects practice sustainability as a method of damage control, he explained.

"We need to have a really frank conversation about the way we've been practising sustainability as a whole, it has become a buzzword and it is effectively just damage control," McAulay told Dezeen.

"At this point, it needs to be entirely normal to start an architecture degree and to be taught in a context of a climate emergency where we have been told that we should be net-zero and curbing carbon emissions as fast as possible," he continued.

"If [the design of a building] is not basically near net-zero, it's already outdated, it's already archaic," he explained. "It's not performing as we know it needs to, so that has to be the established standard."

"Everything has to change"

In 2019, the Royal Institute of British Architects launched a voluntary challenge to help architects design net-zero carbon buildings but less than six per cent of UK studios have signed up.

According to UN champion Nigel Topping, architects are also "one of the least well-represented businesses" in the UN initiative to get companies to commit to net-zero emissions by 2050.

However, the latest IPCC report said that "immediate, rapid and large-scale" cuts to greenhouse gas emissions such as carbon dioxide are what is required to ​​tackle human-induced climate change and help to stabilise global temperatures.

"If you understand the gravity of that report, and you understand what it says about buildings, then you know everything has to change," McAulay reflected.

Climate literacy "has to be rooted"

"Climate literacy means understanding that buildings have a significant impact upon climate change," he explained. "That has to be rooted." 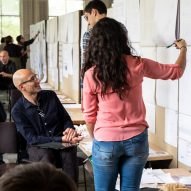 This should start with teaching architecture students that "when you work with any building, or you design any building, it goes into an existing ecosystem".

But skills such as landscaping and retrofitting must also be learned, he said, alongside gaining hands-on building experience with sustainable materials such as hempcrete.

He said an example of this is at the Weitzman School of Design's McHarg Centre, where courses are built on the guidelines of the Green New Deal – a proposal for a government-led remodel of the US economy to address climate change by Alexandria Ocasio-Cortez and Edward Markey.

While individual institutions beginning to teach climate literacy is a positive step, McAulay said that legislation and collaboration between different schools are needed for it to be truly effective.

"To not educate students about climate change and sustainability is negligent and verges on denialism," he explained.

"We definitely need [the teaching of climate literacy] to be in legislation, it can't just be left to each individual institution that feels like it," McAulay continued.

"We are yet to see a united collaborative effort, freely sharing learnings and resources, between as many institutions as we need to build the critical mass to catalyse the necessary, transformative change." 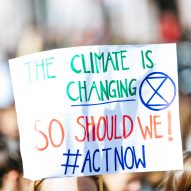 However, recognising that changes in legislation may not happen at the required speed, McAulay is now taking educating emerging architects into his own hands as part of the Anthropocene Architecture School (AAS) – a decentralised architecture organisation that he founded in 2019.

The AAS offers a mix of online resources and workshops that shed light on the changes needed in the industry and the existing resources available to do so. They are available to schools of architecture and their students, as well as tutors, practitioners and the public.

So far this has seen him conduct lectures for staff and students at 15 universities in the UK, the Netherlands and Canada. More recently, he collaborated with students from Manchester School of Architecture as part of its annual programme of student-led live projects, during which they developed replicable Climate Literacy toolkits.

McAulay is far from alone in his concerns about the lack of climate literacy in education. A recent survey conducted by the Architects Climate Action Network (ACAN) revealed that 76.9 per cent of students do not feel their course is properly preparing them for future work.

It also found that 88.5 per cent of students wanted to be tested on their ability to design net-zero buildings, but that "aesthetics are valued more than sustainable design" at their institution.

ACAN's education coordinator Megan Coe told Dezeen that "students feel they are currently being let down by their architectural education".

Achieving net-zero carbon architecture and is one of the topics that Dezeen has explored in its recent editorial series called Carbon revolution. The series also explored ways of removing carbon from the atmosphere through direct air capture and natural processes such as mineral carbonation.