The brick extension adds an additional 2,500 square metres of exhibition space to the MKM Museum Küppersmühle, which is located in a historic grain mill that was originally converted into a museum by Herzog & de Meuron in 1999.

Set on the dockside, the four-storey extension was informed by the museum's existing 19th-century buildings that line the waterfront.

"Consequently, the new structure completes the existing museum and harbour basin in a visually appropriate way, and forms a suitable conclusion to the row of buildings along the harbour basin. The new project constitutes an integrating and complementary architecture."

The extension contains additional gallery space for the museum, which displays an extensive collection of German and European post-war art.

In total, 35 brightly lit gallery spaces have been created over the four stories. 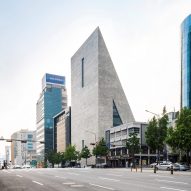 "Bricks on the outside, white cube on the inside," said the studio.

The extension stands alongside a silo tower and its upper floors are connected to the museum's original building by a series of bridges that pass through the silos.

According to the studio, the silos have been restored as "industrial monuments". They are topped with a viewing gallery, which will be open to the public when the weather allows.

It has created numerous cultural buildings around the world including the Tate Modern in London, which occupies a converted power station. The firm added a brick extension to the building in 2016.

Other recent projects by the studio include a cylindrical skyscraper in London and a wedge-shaped art institute in Seoul.