Here are the first images of the wedge-shaped ST/SongEun Building by Swiss studio Herzog & de Meuron, which has recently completed in Seoul, South Korea.

The monolithic structure, which is due to open this September in the Chung Dam District, contains art studios and exhibition spaces for the SongEun Art and Cultural Foundation – a non-profit organisation that supports local artists.

The ST/SongEun Building, which is Herzog & de Meuron's first realised project in South Korea, is characterised by its tactile concrete surfaces.

The concrete was imprinted with a checkerboard of wood grains created by rotating the orientation of the wooden panels used in the formwork.

These surfaces are a nod to the name of the building and organisation behind it, which translates as "hidden pine tree".

The 8,000-square-metre building contains 11 storeys above ground and five below. Exhibition spaces and art studios will occupy the lower levels, while the upper storeys will be used as offices for the energy company ST International.

The building's tallest facade faces the main street, while its lower side faces a garden and responds to the scale of the surrounding neighbourhood.

According to Herzog & de Meuron, this distinctive shape was directly informed by the area's zoning laws.

"While the neighborhood mainly consists of two- and three-story buildings, the zoning law allows for higher density towards the main street, with complex zoning rules leading to very different maximum envelopes for each plot," the studio explained.

The monolithic form is only broken by a few windows, which were placed to offer "views to the main street and to help orient the visitor within the building," according to the studio. 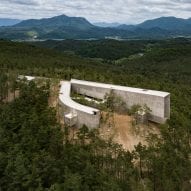 Cut-outs at the base of the building invite visitors into the main lobby and garden, or to a ramp leading to an underground cave-like exhibition space and parking area.

This ramp creates an opening in the ceiling of the exhibition space and is designed to connect it visually and acoustically to the street above.

The ST/SongEun Building is due to open with two exhibitions, one of which will be curated by Herzog & de Meuron. The second will celebrate the 21st edition of the SongEun ArtAward – the foundation's annual prize to support young Korean artists.

Concrete is a popular material choice for architects designing art and cultural buildings. Tadao Ando recently transformed the historic Bourse de Commerce building in Paris into an art museum and placed a nine-metre-tall cylindrical concrete wall within its rotunda.

Herzog & de Meuron was founded in 1978 by Jacques Herzog and Pierre de Meuron. Other recent projects by the studio include the M+ museum in Hong Kong and a boutique hotel in historic Volkshaus Basel.

The photography is by Jihyun Jung.